21 AMAZING Facts about the History of Copenhagen!

The capital city of Denmark sure is a bright and beautiful shining light in Scandinavia. Not only is it quite the cool city, but it also has an enchanting history that we are excited to share with you right here.

As the capital of the happiest country in the world, Denmark comes out on top in more ways than won. It also has a ton of art museums, and is also known for being incredibly eco-friendly. Copenhagen actually intends to be the first carbon-neutral city in the world by 2025. Way to set solid goals, guys!

So buckle in and get ready to ride through the fascinating history of the City of Copenhagen. We have our list of the 21 fun facts about Copenhagen packed with curiosities and plenty of surprises. Readers, read on! 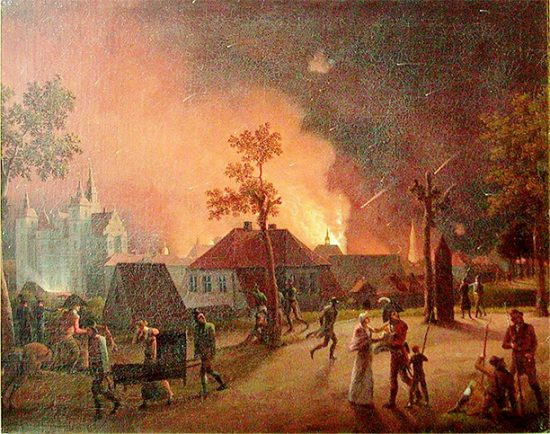 Originally, Copenhagen was a humble fishing village that went by the simple name of “Havn” which translates to harbor. It was the Bishop Absalon, who was an advisor to the Danish King Valdemar the Great, who came on in to Copenhagen and began building fortifications around the city in the 13th century. Who knew that Bishops guaranteed city growth and development? Was this a surprise to everyone or just us?

After the fortifications were completed, the harbor and the herring led Copenhagen into a period of growth and development. It actually was attacked many times by the Hanseatic League, because the Germans were threatened by Copenhagen’s growth and expansion as a key center of trade. Sometimes, jealousy really does get out of hand.

#3 – When You’re Famous For a Few Things

My, my. Well, the Danish King Christian IV was known for a few things. Namely, drinking and burning witches. Also, for commissioning some of the most iconic buildings Copenhagen has to offer. Such as the Børsen and the Rosenborg Castle. He ruled over both Denmark and Norway between the years 1588 to 1648. When you have to be famous for something, might as well balance out the good with the bad, right?

Ready to book? Here are our favorite areas to stay in Copenhagen!

The History of the Kalmar Union 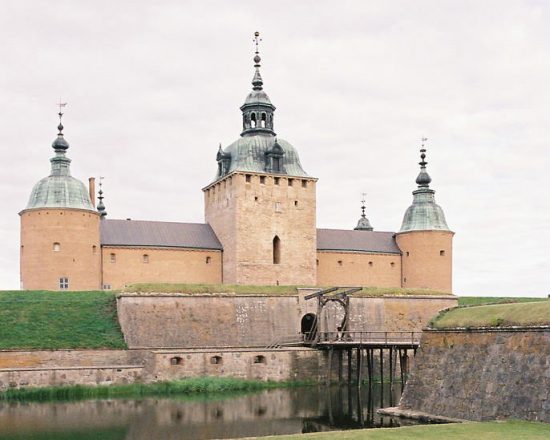 Interestingly, Copenhagen was not always just the capital of the country of Denmark. It was also the capital of Norway and Sweden together! These three countries made up to the Kalmar Union which actually lasted from 1416 to 1523. We dare say, that’s a long time to stay in a relationship! Sweden decided to break away in 1523 first. Someone just had to let go…

Given it’s crucial position to the Baltic Sea, the city of Copenhagen was vulnerable to attack and to others who felt threatened by its strategic location and growing power. Thus, a stone wall was erected to protect Copenhagen. In fact, from 1290 all the way to the middle of the 19th century, if you wanted to enter Copenhagen, you could only do so through one of the four city gates or from the harbor itself. Copenhagen sure took it’s security seriously… for centuries!

#6 – Fortifications: Past and Present

In the 17th century, the largest expansion of the fortifications took place to accommodate cannons. These ramparts remained intact and in use until the late 19th century when they were finally decommissioned. Today, only a small part of the ramparts are still intact as the rest have been taken down, with the grounds now used as parks and as spaces for museums and public buildings. Sometime repurposing really rocks! See what we did there… oh puns!

Haven’t found what you’re looking for? Try our hotel guide for Copenhagen!

#8 – The Population Today of Copenhagen

The population of Copenhagen today comes in around 1.3 million. In fact, ten-percent of the entire country’s population lives in Copenhagen. That means that the population density is actually forty-five times more dense than the rest of Denmark. Hungry for more? Seventy-three percent of Copenhagen residents are Danish in origin. Denmark sure is well represented in their capital city. Probably not a huge surprise there, though. 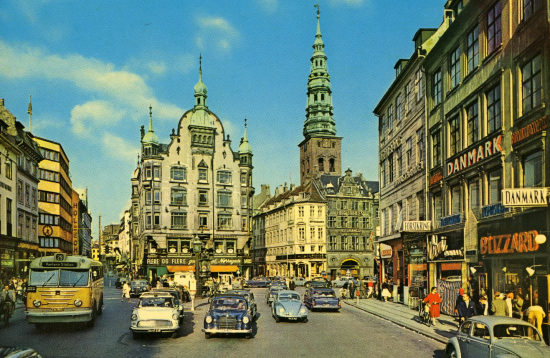 The Stroget is one of the world’s largest and longest pedestrian malls. It is 1.1 kilometers of car-free shopping heaven! It sits right in the center of the Old City of Copenhagen. It was back in 1962 that the city dubbed it car-free. It was the success of this designation that triggered quite a few of Copenhagen’s initiatives to place a greater focus on pedestrian walkways and bicycle paths than on cars. It all started with the Stroget!

In 1962, when the local government of Copenhagen decided to close five city streets to all car traffic for the Stroget to be pedestrian only, they were actually met with a lot of protest. Upscale shops, in particular, feared that this would be bad for business.

Imagine! People had to walk to their shops from farther away than just their cars! The horror! There were even some business owners who sent death threats to the mayor. Now, that’s serious! Never fear, those pedestrian streets stuck.

Not sold on Copenhagen? There are some incredible things to do in Copenhagen that won’t believe!

History of the Den Lille Havfrue 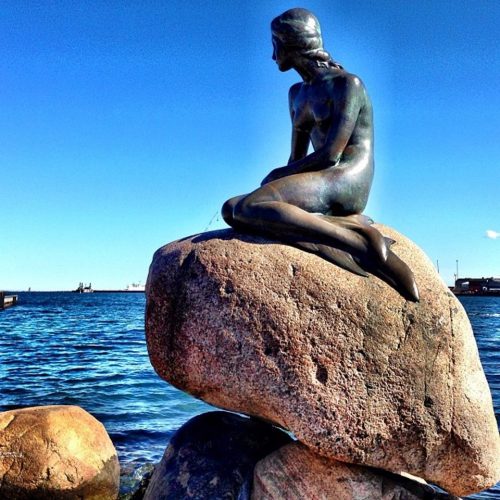 #11 – When Disney Gets Inspired

The Den Lille Havfrue is a bronze statue that also goes by the name: The Little Mermaid. It was sculpted in 1909 and sits on the Copenhagen Harbor Promenade. It’s rumored that after a visit to Copenhagen, Walt Disney decided to create the movie, The Little Mermaid in honor of this very statue! But given the time stamp on his visit and on the movie’s release date, that does seem a little dubious.

#12 – When Mermaids Are Mistreated

The Den Lille Havfrue, the Little Mermaid statue has seen some pretty severe abuse over the last 100 years. We won’t go into too many of the gory details, because it’s a mermaid princess we are talking about here! But we will mention that she has been decapitated… twice! When will people learn to respect the mermaids?

Excited to visit Copenhagen? Get excited to take an amazing day trip too!

History of the Tivoli 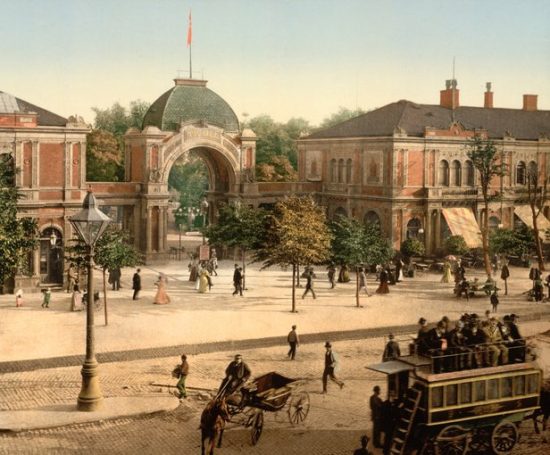 The Tivoli is an incredibly beautiful amusement park in Copenhagen that is often likened to a fairytale in atmosphere and ambiance. It was built in 1843, and is the second oldest amusement park in the world. It is known for its roller coaster rides and pantomime shows.

Walt Disney visited Copenhagen in 1951 and is rumored to have spent a great amount of time at the Tivoli taking down pages and pages of notes! He wanted to emulate Tivoli’s atmosphere at Disneyland itself. I suppose we have to thank the Danish for helping inspire our most treasured American theme parks!

Tired of making plans? Our favorite tours in Copenhagen remove stress from the equation!

The Bakken was opened in 1583, after a natural spring was found in the park. Crowds, performers, and hawkers all flocked to the spot and a carnival-like atmosphere was developed. Rollercoaster rides and cabarets weren’t far behind…

When you’re at an amusement park, there are some things you really are hoping to do and see like riding a roller coaster and eating some cotton candy. What might not be on your list, but totally should be, is hanging out with 2,000 free range deer! That’s right, the Dyrehavsbakken is home to nearly 2,000 deer! Go ahead and take a picnic with some deer in between riding rides. The selfies are sure to be “adearable.” 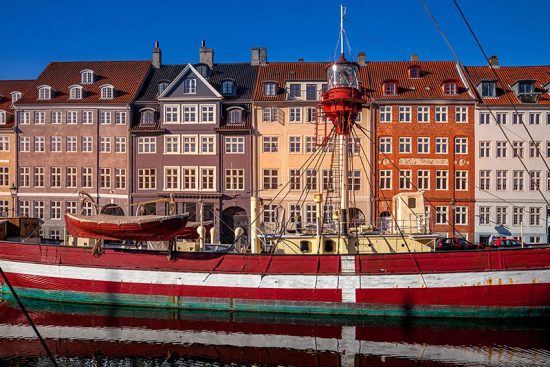 Copenhagen is actually one of the greenest cities in the world! They plan on being carbon neutral by 2025. Over the past ten years, they have cut emissions by a third! They’ve harnessed both wind and solar power to provide energy for the city. They’ve also been using small pieces of unused land by converting them into “pocket parks.” These tiny parks are perfect for a quick green-fix but also good for flood prevention! Two birds, one stone.

Did you know that Copenhagen residents love bicycling? Maybe you already did. But did you know that there are over 250 miles of bike lanes in Copenhagen? That’s a lot of miles! Moreover, there is now a “super highway” made exclusively for bicycles that connects Copenhagen with one of its suburbs. We’re sure more bicycle highways are to come at this rate.

History of the University of Copenhagen 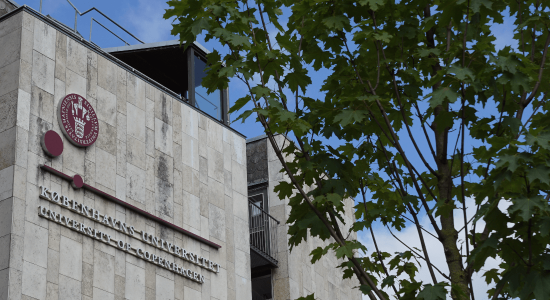 History of the Carlsberg Brewery 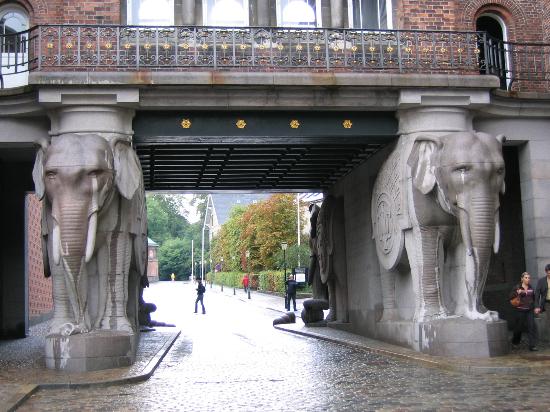 #20 – The Founding of a Brewery… and a Beer Laboratory

Carlsberg Brewery was founded by an art collector, J.C. Jacobsen in Copenhagen. The first brew was officially finished in November 1847 and exports began in 1868. Jacobsen’s son, Carl, decided to open an official brewery in 1882. Then, they opened the Carlsberg Laboratory in 1875 which was dedicated to solving all the scientific problems related to beer. They really take their beer seriously at Carlsberg…

The Carlsberg Brewery in Copenhagen also serves as a brewing museum. In fact, it is home to the world’s largest collection of unopened beer bottles! The Danish engineer Leif Sonne, first began his beer collection in 1968, and then after he ran out of room at home, he moved his entire collection to Carlsberg in 1993.

Today, there are over 20,000 unopened beer bottles in the collection! The numbers are still growing though. Nice to look at, but sometimes the temptation is just too much!

Final Thoughts on the History of Copenhagen

Copenhagen is an incredible city that has more than a few tricks up her sleeve! From the humble “Havn” beginnings, all the way to the world’s largest collection of unopened beer bottles. Copenhagen is full of surprises!

And even though we didn’t get to cover it, Copenhagen actually has more Michelin-starred restaurants than any other city in Scandinavia. So if you’re planning a visit, make sure you swim in the Copenhagen harbor, which is actually clean enough to swim in! And then go and treat yourself to a delectable Michelin-starred meal. Go ahead, you deserve it.