One of America’s most laid-back of cities, San Diego in southern California somehow manages to juggle its surfer dude relaxed ambience with being one of the largest cities anywhere in the United States. Divided into districts that each have their own unique village-like charms, there’s plenty to interest visitors, from the thriving Downtown area to over 60 beaches and some incredible nearby countryside just waiting to be explored.

But with the city’s location lying close to the border with Mexico, when exactly is the best time to visit San Diego? In this guide we take account not only of the prevailing weather conditions you’re likely to encounter from month to month, but also things such as when hotel prices and tourist numbers are at their height. We also provide you with a list of the top events happening in San Diego each month.

When is the best time of year to visit San Diego?

When it comes to weather, the best conditions of the year are generally found to be during the summer months, but colliding with the long summer school vacations in North America and Europe, heading to San Diego at this time of year with also find the city at its busiest and most expensive for accommodation. 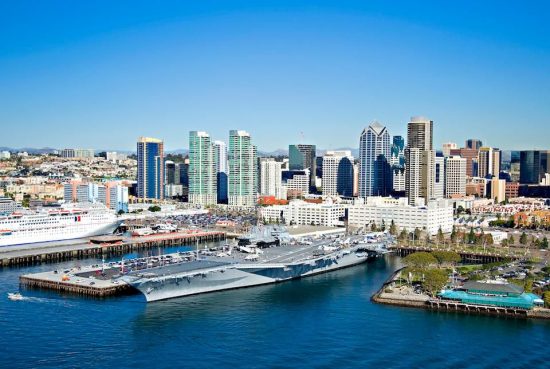 This is our INSIDER GUIDE for the best times to visit San Diego!

A good alternative would be the two annual shoulder periods that exist on either side of high summer. Temperatures are still more than acceptable – with the city never seeing the thermometers drop below 60 degrees Fahrenheit at any time of year. You can also find some very attractive hotel deals during these times.

Low season sits firmly within San Diego’s winter months, when the city experiences the majority of its rainfall, and the Pacific’s waters become too chill to delve into for any length of time.

While nowhere in the world is 100% safe, as long as you use your common sense, you’ll likely be fine in San Diego.

Having said that, you should NEVER travel without proper travel insurance. We’ve tested all of the best travel insurance providers, and World Nomads is our favorite! Fill out the form below to get a quote for your trip to San Diego so you can keep yourself (and your belongings!) covered and safe 🙂


What months are the best time to visit San Diego?

The clear skies and sunny weather of the summer runs right through from June to the end of August. Either side of this period, San Diego’s shoulder periods last roughly from March through to May, and then again from September through to November. May and June are considered by residents to be rather overcast months, although rainfall is almost non-existent at any time from the end of April until the beginning of November. 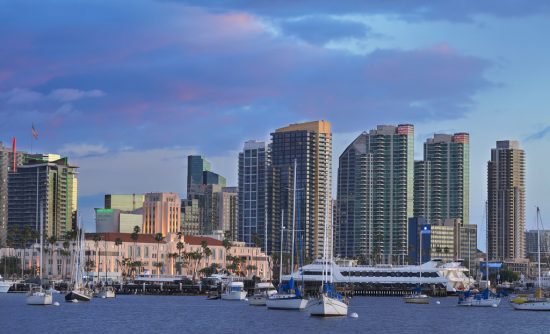 Read below for information about San Diego weather in January (Photo credit – climate-data.org)

Even at the height of winter, in San Diego you certainly won’t need to dig out your thick coats or thermal underwear. The lowest temperatures you’re likely to encounter are nighttime temperatures of 49°F (9°C), while during the day the temperature can easily reach 66°F (19°C). The wettest month of the year, around 1.8 inches of rain falls, usually over no more than 4 days.

Need more specifics? Find out where to stay in San Diego based on what you want to do there! 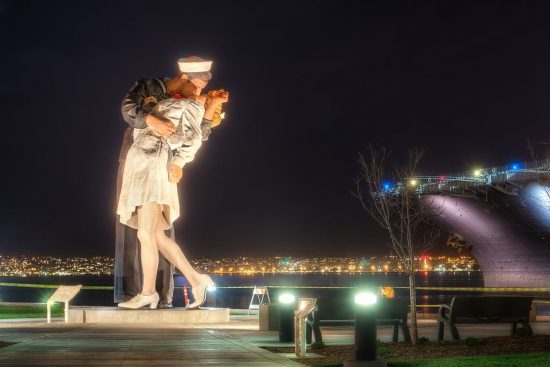 The temperatures in January hold roughly steady until the end of February. The second month of the year sees slightly less rain falling, with 1.5 inches recorded as falling over 4 days. From 10.5 hours of daylight in January, this rises to 11 hours in February.

Not sure where to say? We’ve put together a list of San Diego’s best hotels! 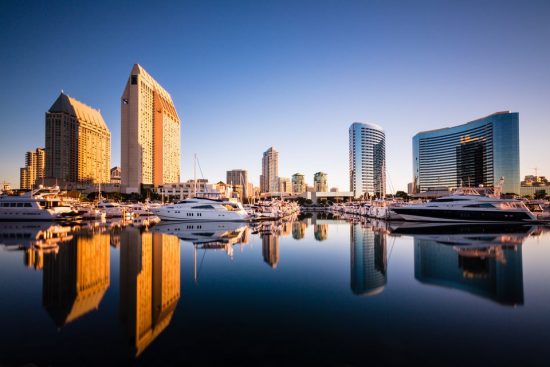 While the average lows experienced in March rise to 53°F (12°C), the highest temperatures you’re likely to enjoy remain identical to those of January and February, at a very pleasant 66°F (19°C). When it comes to rain fall, this rises again after February, with around 1.8 inches measured over 4 days in the month.

Let’s make this simple. These are the best hotels in San Diego! 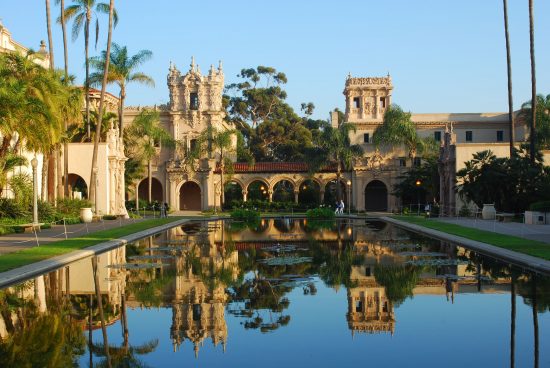 With the average number of daylight hours now hitting 13 hours per day, the temperatures also take another slight nudge upwards. You’re unlike to see a minimum temperature below 56°F (13°C), while peak temperatures rise to 68°F (20°C). In contrast, rainfall plummets to just 0.8 inches across the whole month.

MUST READ – There are some incredible day trips from San Diego you should know about! 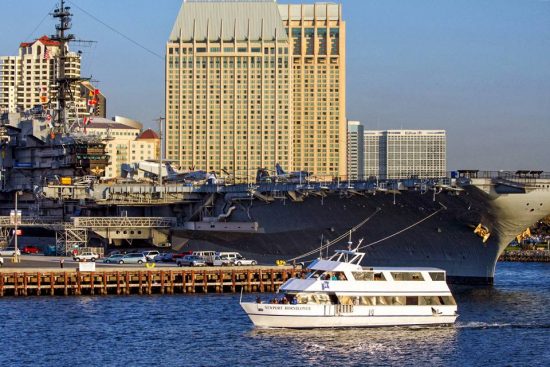 San Diego weather in May

Unsurprisingly, the temperatures take their onward, upward march in May, although this refers mainly to the lower end of the daily spectrum, with highs remaining almost identical to those in April. Very little rain falls – just 0.4 inches – although cloud cover lingers to give the city a slightly overcast feel.

San Diego events in May

Planning a trip? See our list of the best things to see in San Diego! 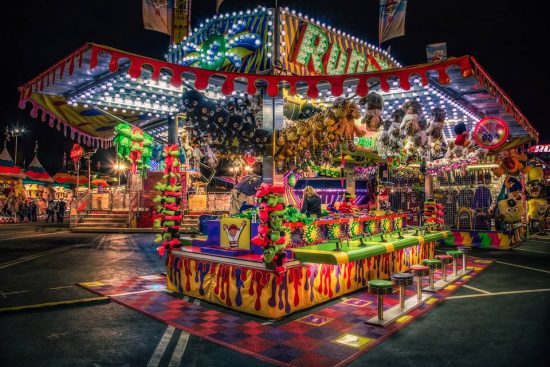 While there’s a full 14 hours between sun rise and sun set, and so little rain its barely worth talking about (0.07 inches should you be interested), June is generally quite another overcast month. On the up-side, temperatures now reach 72°F (22°C), and only ever fall to levels of 62°F (around 17°C).

Editor’s note – These are the 15 most beautiful beaches in San Diego! 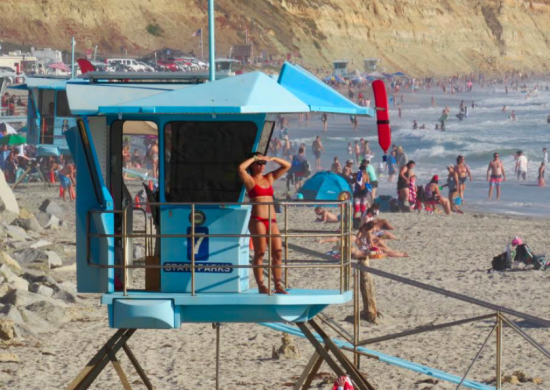 Read below for information about San Diego weather in July (Photo credit – sandiegouniontribune.com)

The beginning of high summer balances clearer skies with a complete absence of rain and temperatures ranging between 66 and 76°F (19 to 25°C). Incredibly, this lower figure is also the temperature you’ll be able to enjoy should you opt to head for the beach and jump into the waves. 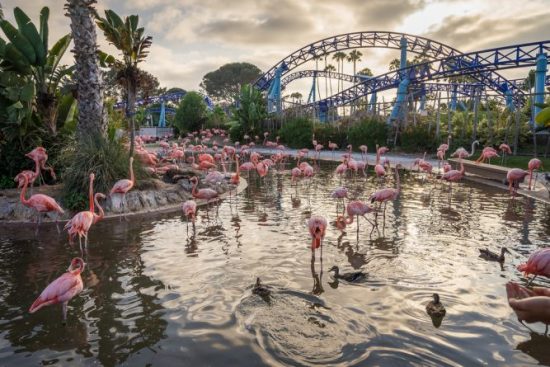 Read below for information about San Diego weather in August (Photo credit – climate-data.org)

The steady build-up in warmth over the past months comes to a head in August, which is San Diego’s warmest month of the year. With lows of 67°F (19°C) and highs of 78°F (25°C), its never too hot to enjoy all the city has to offer however. Nor is rain a problem. Sea temperatures hit 68°F (20°C). 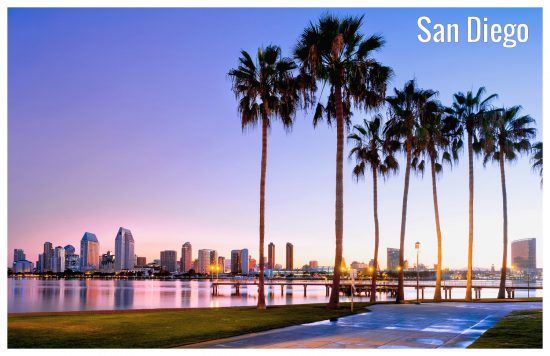 The summer might be official over for another year, but that doesn’t mean San Diego becomes a no-go destination. Far from it in fact, with temperatures still lying within the range of 65-77°F (19-25°C), and rainfall that doesn’t even reach a quarter of an inch. 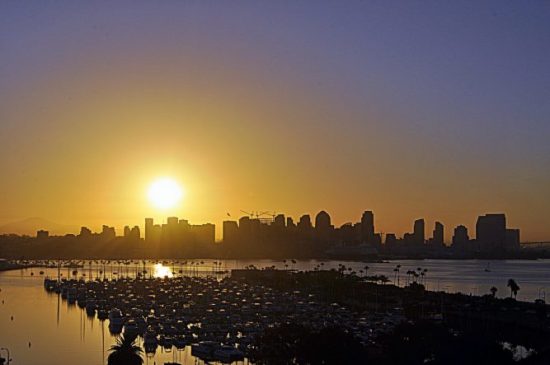 Read below for information about San Diego weather in October (Photo credit – climate-data.org)

The true beginning of fall manages to keep some pretty impressive temperatures, with the thermometer not falling below 61°F (16°C), and highs up into the middle 70s (or around 24°C). October is also the last month in the year when you don’t need to worry about rain, with less than half an inch falling on the coastal city. 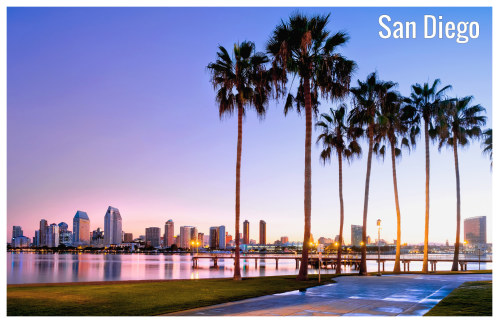 There is a noticeable drop in temperatures for Thanksgiving month. Lows now fall back to 54°F (12°C), while highs are still able to manage a peak temperature of 70°F (21°C). The main change between October and November has to be the amount of rain to expect, with 1.5 inches measured on average in the month. 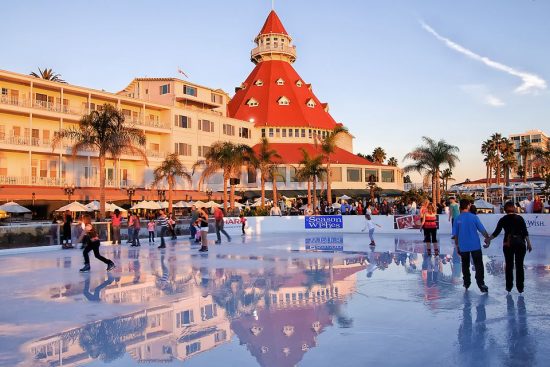 Coming close to the being the coldest month of the year, which December avoids by just a few tenths of a degree, temperatures can fall as low as 49°F (9°C). On the plus side, highs still reach 66°F (19°C), though the month also sees just over 1.5 inches of rain across 4 days.

What is the best time to visit San Diego weather wise?

The best time to visit San Diego weather wise is arguably some time during the months from March through to November – a pleasingly long period in which to consider visiting the city. Thanks to its location in southern California close to the border with Mexico, the city has warm to hot weather right the year round, with temperatures never falling below around 50°F (9°C).

March through to May, slap bang in the middle of spring, not only has good all-round temperatures, but the latter half of this period also sees very little rain, although cloud cover can be an issue. The high summer months of June, July, and August offer almost guaranteed warm weather and sunny skies, and also has the sea warming up enough that you can enjoy surfing and other water sports without worry.

Finally, the period from September through to November is broadly similar to that of March to May, although rain once more becomes a factor to take into account of when entering November itself.

Final thoughts on the best time to visit San Diego

The weather can rarely put much of a dampener on events in San Diego, making this Pacific coast city in southern California a potential vacation destination at pretty much any time of year. This is absolutely fantastic news, since San Diego offers an incredible wealth of attractions for visitors, from its laid-back ambience, and district by district vibe, to San Diego Zoo, Comic-con, and some world-class museums. The fact is, whatever time of year you decide is the best time to visit San Diego for you, you’re sure to find events and activities that show the city off to its very best.

About the Author Nicola Smart

Gin lover. Coffee addict. Nicola has traveled the world for 7 years and is a staff writer for Hotel Jules. Born in London, Nicola first got the taste of travel studying abroad in Barcelona. Since then she's been hooked - traveling the world non-stop. Passionate about green travel and vegan lifestyle, Nicola spends more of her free time staring at maps wondering where she will head to next!