New York, New York. The city that never sleeps. Backdrop to films as diverse as Breakfast at Tiffany’s and Home Alone 2, and the location of some of the United State’s most important sites – the Statue of Liberty, Ellis Island, Central Park, the Empire State building, Museum of Modern Art, and Times Square.

With the city’s famously rather snowy winters, when exactly is the best time to visit New York? Located on the northern reaches of America’s east coast, the best time to visit New York for you will depend not only on the weather, but also on accommodation prices – which can alter significantly throughout the year – and peak tourist season too. Here we guide you through New York month by month, and provide you with a list of top events to act as a starting point for your exploration of this incredible city.

When is the best time to visit New York?

The most popular time to visit New York is the summer. The weather, together with the long school vacations at this time of year in both North America and Europe, make it the ideal time for many families to visit. It can also be less crowded than you might expect too, since many native New Yorkers take the opportunity to leave the city during this time. However, as the tourist high season, you will face the highest accommodation costs of the year. 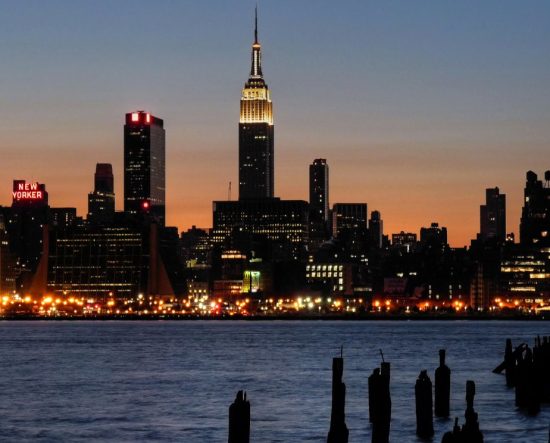 This is our INSIDER GUIDE for the best times to visit New York!

Another popular time to visit New York is in the run-up to Christmas. Incorporating Thanksgiving and the Black Friday shopping event at the end of November, this is also considered high season, and the city takes on a definite festive air.

Slotting in between these two high season periods are a couple of shoulder seasons, when the weather is still more than acceptable, but prices slightly reduced. Heading to New York either before the onset of summer, or between the end of summer and beginning of the festive period, can save you a substantial amount of cash without noticeably worse weather.

While nowhere in the world is 100% safe, as long as you use your common sense, you’ll likely be fine in New York.

Having said that, you should NEVER travel without proper travel insurance. We’ve tested all of the best travel insurance providers, and World Nomads is our favorite! Fill out the form below to get a quote for your trip to New York so you can keep yourself (and your belongings!) covered and safe 🙂

What are the best months to visit New York?

As with much of the United States, the best months to visit New York hover around the summer, with the best temperatures being found in June, July, and August. Humidity can be a bit of a problem in the height of summer, although the good weather exists beyond these three months to range from May right through to October. For example, September offers up an excellent combination of shoulder season pricing, sunny skies, and mild temperatures free of humidity.

During this time, you can also enjoy the changing of the leaves with fall, while the coming of new growth in spring is also a wonderful time to experience the city. 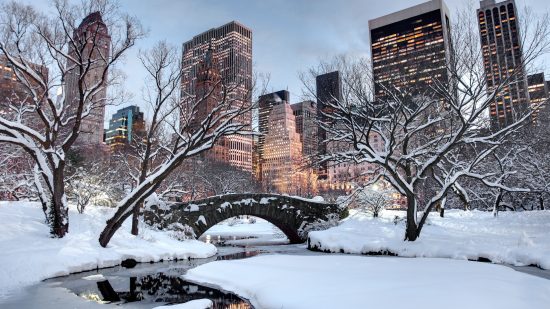 January is, without doubt, the coldest month of the year in New York. Average temperatures are a chilly 37°F (3°C), with highs just a couple of degrees up on this figure and lows of down to 10°F (-12°C). Snow is also a common occurrence, with precipitation across the month of 3.2 inches.

Need more specifics? Find out where to stay in New York based on what you want to do there! 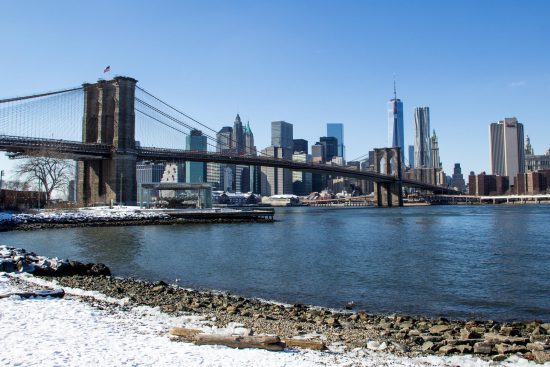 Read below for information about New York weather in February (Photo credit – climate-data.org)

The short daylight hours of February are also best defined as cold, with a temperature range which creates an average of 39°F (4°C). Snow is still more common than not, and the month of Valentine’s Day sees precipitation levels similar to that in January, averaging three inches.

Let’s make this simple. These are the best hotels in New York! 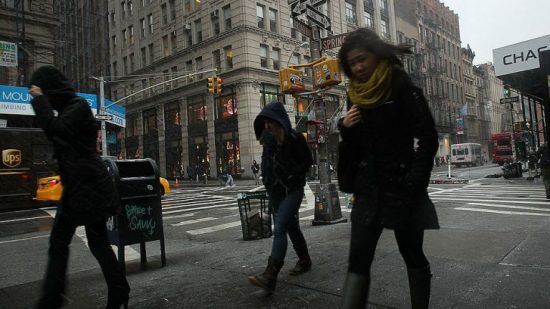 Read below for information about New York weather in March (Photo credit – amny.com)

March generally marks the beginning of spring in New York, with the second half of the month much warmer than the first couple of weeks. The temperatures you’re likely to experience jump considerably, reaching 48°F (9°C), while the amount of precipitation is pretty constant at 3.5 inches.

Do you have an open schedule? Figure out the best things to do in New York before you visit! 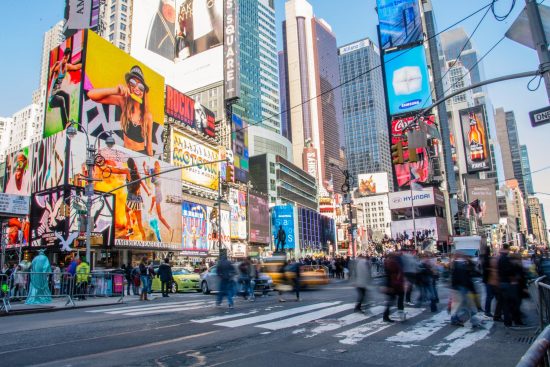 Read below for information about New York weather in April (Photo credit – climate-data.org)

Temperatures take another positive leap upwards in April. The average temperatures for the month sit at around 59°F (15°C), with the full range running from 45°F (7°C) through to 64°F (18°C), making layers of clothing a must. There’s slightly more precipitation than in March, with almost four inches recorded, generally falling as frequent showers of rain rather than snow.

Want to learn more about New York? The top museums in New York might hold the answers! 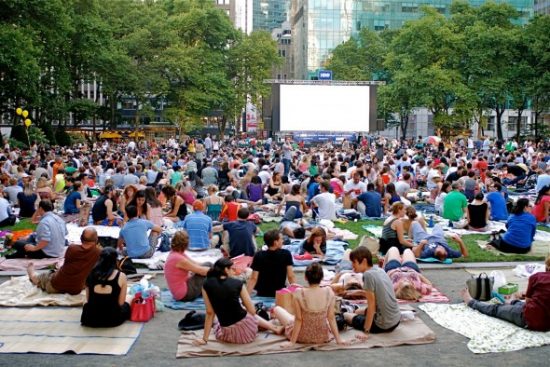 Read below for information about New York weather in May (Photo credit – new-york-city-travel-tips.com)

New York weather in May

The upward temperature trend continues into May, with thermometers not dropping below 50°F (10°C), recording average daily temperatures of 66°F (19°C), and shooting up to a very summery 79°F (26°C) too. Levels of rainfall are almost exactly the same as in April, though the days are noticeably longer than they were at the start of the year.

New York events in May

Interested in New York? Read up on the history of New York! 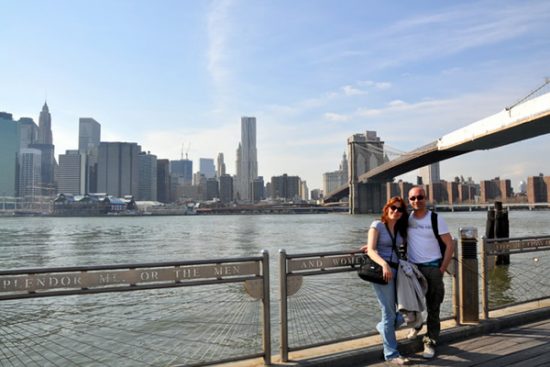 Read below for information about New York weather in June (Photo credit – new-york-city-travel-tips.com)

June is generally lovely and warm without being overly humid. Check the thermometer and you’ll find temperatures heading as far north as 77°F (25°C) and never dropping to a level that could be considered chilly. Rainfall remains constant from the previous months, at around 3.5 inches, though it now tends to fall as heavier showers.

Short on time? One of these tours in New York is the best way to see the most! 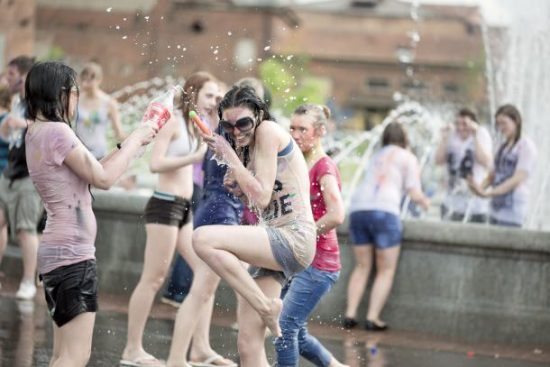 Read below for information about New York weather in July (Photo credit – packforcity.com)

July is New York’s hottest month, and also boasts the longest day of the year, with daylight hours extending more than 14 hours. Temperatures have a range between 70 and 95°F (21 to 35°C), averaging highs of 82°F (28°C). Levels of precipitation hold steady, although humidity becomes an increasing problem as the month draws to an end. 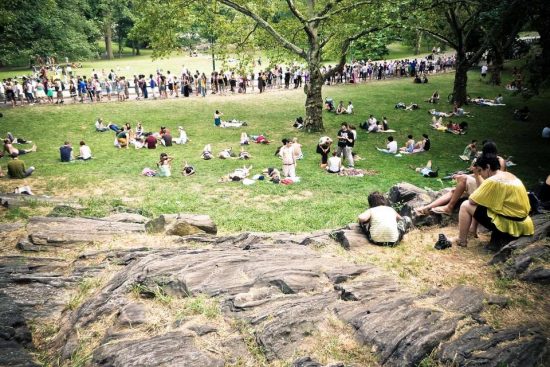 August is the stickiest month of the year, with humidity at its highest – somewhere around the 70% mark. It builds throughout the day, often leading to a short thunderstorm in the evening. The month’s average temperature highs reach 82°F (28°C), with the amount of rainfall actually slightly lower than in previous months, at 3.5 inches.

Editor’s note – These are the 15 most beautiful beaches in New York! 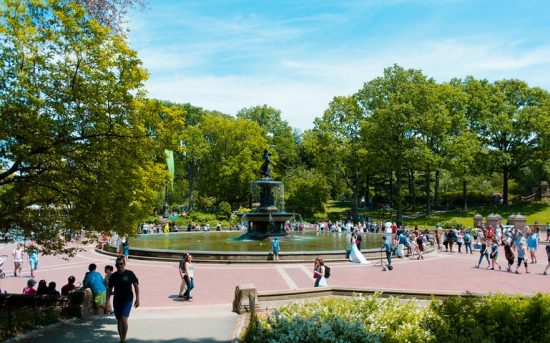 Read below for information about New York weather in September (Photo credit – blog.headout.com)

Like March, September sees a mixed bag when it comes to weather in New York. The city can continue to experience hot and humid summer weather, but also conditions more akin to fall in the city. Temperatures fall to an average of 73°F (23°C), with the lowest figures now around 70°F (21°C) and highs of 81°F (27°C). 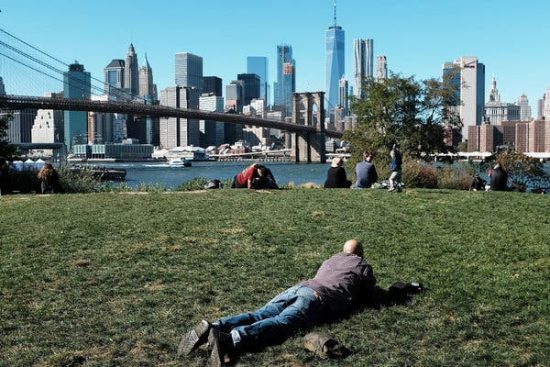 Read below for information about New York weather in October (Photo credit – nytimes.com)

The driest month of the year – but not by much, with precipitation levels changing little across the year – October generally experiences just under three inches of rain. Temperatures continue their downward trajectory, offering figures of anywhere from 50-68°F (10-20°C), and highs averaging 64°F (18°C). There’s also still a good 11 hours of daylight. 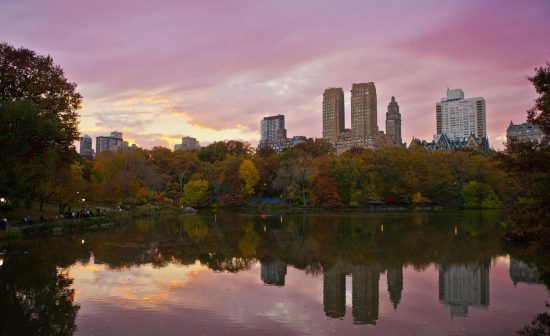 Read below for information about New York weather in November (Photo credit – climate-data.org)

November is the month in New York when its usual to see fall turn to winter. Not only do the days continue to get shorter, but temperatures drop further, and precipitation levels jump up to 3.6 inches – as both rain and snow. Temperature wise, the average you’ll experience is 54°F (12°C), so you’re going to need some warm clothing. 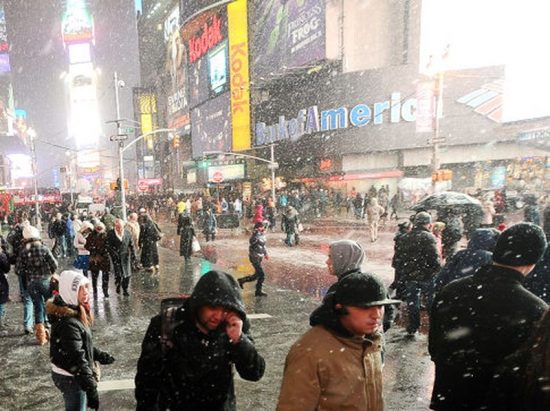 Read below for information about New York weather in December (Photo credit – nydailynews.com)

With winter in full swing in December, temperatures are really struggling, and average only 43°F (6°C). There’s also often a bitingly cold wind to deal with, and precipitation that hits 3.5 inches. That said, the attractively snowy streets and festive lighting somehow makes the city feel warmer than it is.

What is the best time to visit New York weather wise?

New York is a welcoming city weather wise from May through to the end of September. This period not only includes the high summer months of June, July, and August, but also the periods before and after. This five-month period offers the best weather in the year, when it comes to temperatures (rainfall is pretty much constant in volume throughout the year).

However, if you’re in need of a little Christmas cheer, then heading to the Big Apple for the festive season – including both Thanksgiving and Christmas – is not a bad idea either, though you’ll have to be prepared for snow as well as Christmas lights.

Final thoughts on the best time to visit New York

As a city that famously never sleeps, there is no bad time to visit New York. The city has an incredible array of events right throughout the year, with those in the warmer months often taking advantage of the better weather to bask in the sunshine out of doors. Whatever your interests, you’re therefore bound to find something to entertain you whatever the time of year!