21 MUST KNOW Facts about the History of Vienna!

As the capital of Austria, Vienna is known for a rich history that goes all the way back to the first post-Christian century in which the Romans set up camp in Vindobona. Get ready to be dazzled by Vienna’s stunning history filled with palaces, cathedrals, and even a Spanish Riding School— all of which are home to an interesting fact or two!

In fact, Vienna has two very impressive and well-earned nicknames: The City of Music and The City of Dreams. As home to some of classical music’s most incredible composers and the home to Sigmund Freud, Vienna surely has earned the right to go by those two names!

Let’s dip our toes into Vienna’s secrets and find out the most interesting facts the capital of Austria has to offer. Whether you are interested in Vienna’s sausage stands or their exceptional classical composers, we’ll make sure to cover all the bases here on our list of the 21 most fabulous facts about Austria! 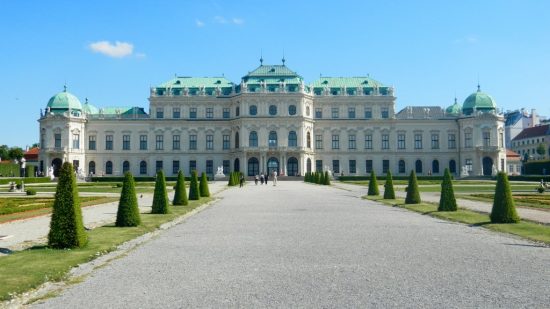 The Roman Empire set up a military camp in Vienna’s city center in the 1st century, and called it Vindobona. Interestingly, the name comes from the Celtic language which means that it was likely inhabited before the Romans arrived. This Roman settlement was actually a key trading site all the way up until the 11th century!

The glory didn’t stop at being an important trading site, as the decades passed and the years went on and on Vienna became the capital city of different dynasties and actually became one of Europe’s top cultural centers! After WWI, Vienna officially became the capital of the Republic of Austria.

By the mid-1200s, Vienna became one of the most beloved cities in the Holy Roman Empire. What was rather embarrassing for Vienna though was that they didn’t even have their own bishop! Eek! The horror! Desperate for a bishop of their own, Vienna negotiated to get their own bishop and was eventually given one in 1469.

Ready to book? Here are our favorite areas to stay in Vienna!

St. Stephen’s Cathedral is also called Stephansdom, or even Stephanskirche. It was first established in 1147, however, it was added on to multiple times and reconstructed many times due to fires. In fact, during WWII, the cathedral suffered enormously from aerial bombings. However, it was lovingly rebuilt and restored to its former glory by 1952. It didn’t take too long for the Austrians to restore this architectural gem to its full splendor!

Why not mix things up with a nice blend of Romanesque and Gothic architectural stylings? St. Stephen’s Cathedral is a mix of those two styles all housed in enormous limestone walls. The truly most impressive feature is the decorative tile roof which is composed of just a few tiles… 230,000 tiles! 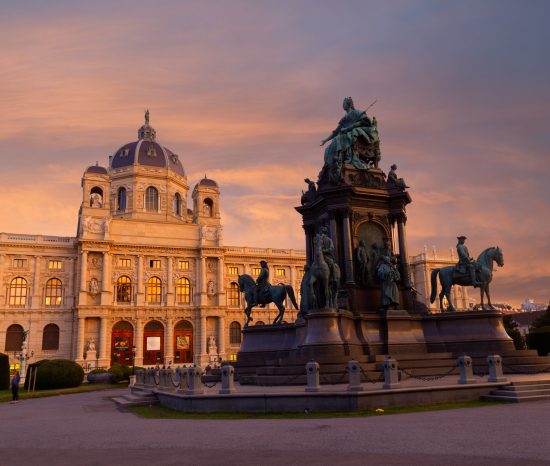 First known as the Historical Museum of the City of Vienna, the Vienna Museum was first founded in 1887 and was originally located in the Vienna Town Hall! It wasn’t until 1959 that the first plans for a Karlsplatz museum was formulated. We are sure things in town hall were getting a little cramped anyways…

#7 – When The Fourth Place Winner Is The Real Winner

In 1953, Vienna held a design competition for the Vienna Museum. A total of 80 contestants took part in the competition, and even though Oswald Haerdtl took fourth place he was actually the one contracted to design the museum! Sometimes fourth place is good enough—good enough to steal the gold away from the real winner!

Haven’t found what you’re looking for? Try our hotel guide for Vienna! 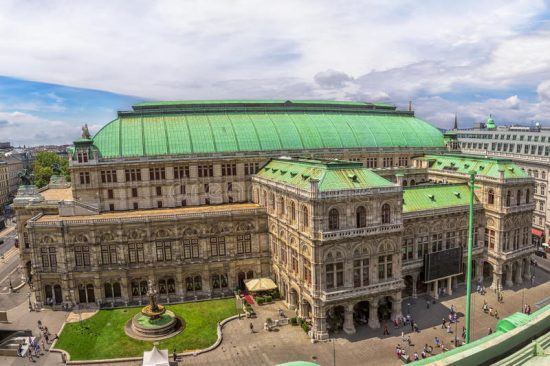 The Vienna State Opera was completed in 1869 after eight years of hard work! It was actually first called the Vienna Court Opera until the establishment of the Austrian Republic in 1920, in which a name change was called for!

The Vienna State Opera puts on a total of 70 productions a year and never repeats a performance, all except for just one single time a year. On New Year’s Eve and on New Year’s Day each year it is their tradition to perform Strauss’ Die Fledermaus on both days. That’s all folks! Every other performance is never repeated two nights in a row!

The Vienna State Opera House actually has an underground tunnel between it and the building next door. Why the tunnel? Because sometimes you don’t need a new closet to cram in your clothes but a whole new building! The Vienna Opera has more than 180,000 costumes so they needed another building to house them all. And you thought you had a lot of shoes….

Planning a trip? See our list of the best things to see in Vienna! 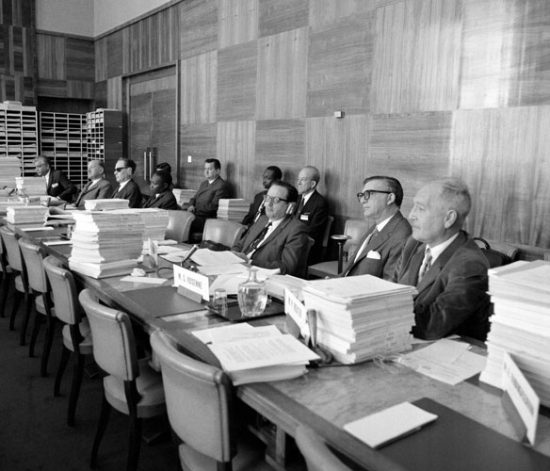 The Vienna Convention on Diplomatic Relations was established in 1961. The purpose was to define a framework for diplomatic relations between independent countries. It actually provides a legal basis for diplomatic immunity. The United Nations adopted a very closely related treaty, the Vienna Convention on Consular Relations. To this day, 192 states have ratified this international treaty. Nice work, Vienna!

History of the Schonbrunn Palace in Vienna 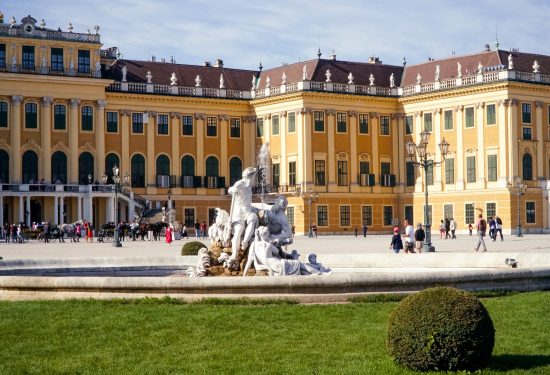 The name Schonbrunn translates to “beautiful spring.” According to local legend, the estate was named for a water source that the Emperor Matthias came across when hunting on the property back in 1612.

Wolfgang Amadeus Mozart actually performed for Empress Maria Theresa at the Schönbrunn Palace in 1772. While he certainly was a six-year-old prodigy, he had to wait until he was sixteen years old to be invited to play at the Schonbrunn! In fact, he was reported to have played duets accompanied by his older sister in the Hall of Mirrors.

Excited to visit Vienna? Get excited to take an amazing day trip too! 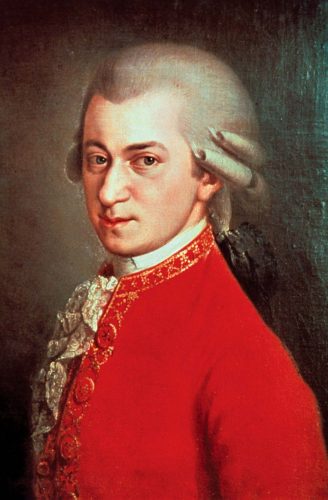 Mozart was born in Salzburg, Austria but moved to Vienna in his twenties. He actually was married at St. Stephen’s Cathedral in 1782. He composed over 600 works, and actually completed his first symphony when he was eight years old! While we were making cookies, Mozart was making symphonies!

While Ludwig van Beethoven was German-born, he spent the majority of his life in Vienna studying under composer Joseph Haydn and composing music himself. He started losing his hearing when he was only 26 years old, and by the last 10 years of his life, he was completely deaf.

History of the Spanish Riding School 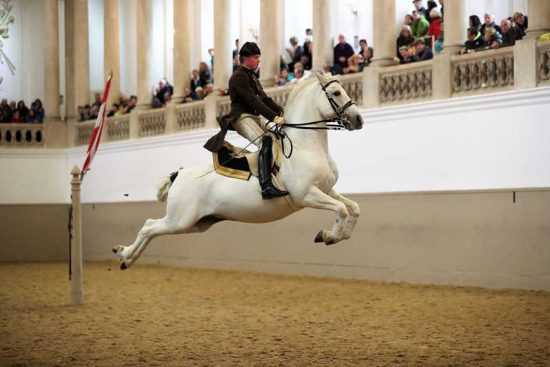 The Spanish Riding School in Vienna is known for exclusively riding and showing the Lipizzaner breed of horses. Lipizzaner horses are usually born dark grey or black and they become whiter or lighter in color as they get older. In total, the school has 72 stallions and only 19 members of their equestrian team. It takes eight to twelve years to earn the title rider. Talk about a tough school! 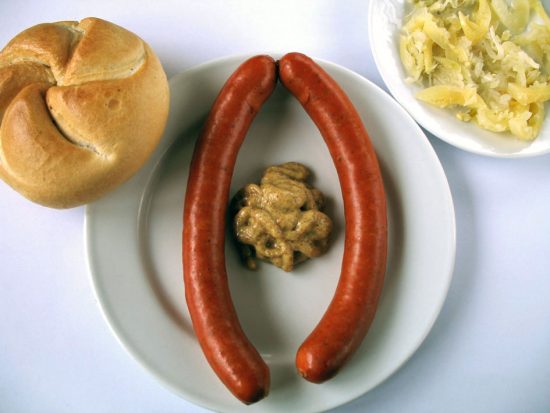 Want to go deeper? Take a cool tour in Vienna to learn more than you could on your own!

History of Sigmund Freud in Vienna 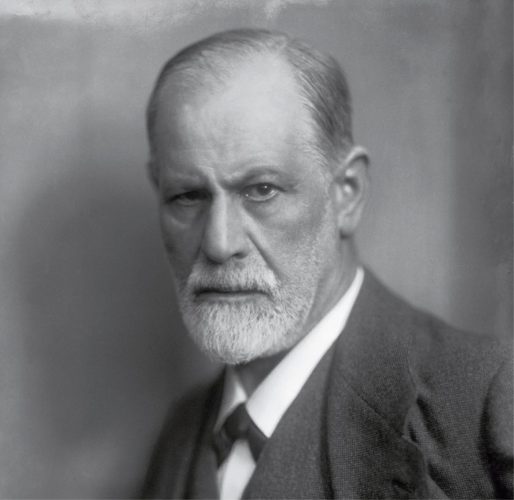 The father of psychoanalysis, Sigmund Freud, lived in Vienna for 47 years. Although he was born in Germany, he was forced to emigrate to Austria by the Nazis. Interestingly, he experimented with therapy dogs and allowed his chow-chow, Jodi, to sit with anxious patients during appointments!

Sigmund Freud was actually nominated for the Nobel Prize thirteen times! However, he never actually won. Sometimes, it’s the thought or the nomination that counts, right?

Vienna’s Giant Ferris Wheel in the Prater stands 65 meters tall and is one of the most iconic city symbols. Even if you haven’t seen it yourself, you might recognize it from popular Hollywood movies like the James Bond movie, “The Living Daylights.”

Final Thoughts on The History of Vienna

Vienna sure has earned its name as the City of Music as four of the top ten classical composers in all of history lived or worked in Vienna between 1750. That much is for sure, right? As is the fact that Vienna deserves the name, The City of Dreams, as father of psychoanalysis, Sigmund Freud, spent the majority of his career there.

One thing that might be a bit more controversial is that the famous French pastry, the croissant, might actually have been invented in Vienna! We sure didn’t want to cause a controversy or a scandal, so we left that off our 21 fun facts about Austria list, so if you are curious about the croissant, go ahead and do some digging yourself.

If you want to skip the controversy, stick to our list above or go ahead and enjoy two more fun Vienna facts: Vienne invented the snow globe in 1900 and the Pez tablet candies in 1927. Originally, Pez used to only come in peppermint flavor though!

About the Author Nicola Smart

Gin lover. Coffee addict. Nicola has traveled the world for 7 years and is a staff writer for Hotel Jules. Born in London, Nicola first got the taste of travel studying abroad in Barcelona. Since then she's been hooked - traveling the world non-stop. Passionate about green travel and vegan lifestyle, Nicola spends more of her free time staring at maps wondering where she will head to next!