21 MUST KNOW Facts about the History of Seville!

Seville, also called Sevilla, is the fourth largest city in Spain and sits in southern Spain just north of the Atlantic Ocean. Seville is actually the capital city of the Andalusia community! We’re going to come in strong with an incredibly juicy fun fact about Seville— it was the filming location for the Kingdom of Dorne from the beloved Game of Thrones series. This bright, balmy, Arabian-esque city is drool-worthy.

Home to one of Europe’s most vibrant festivals, the April Fair, and to the oldest palace still in use in all of Europe, Seville sure has a lot of history to dive in to. Let’s get to work unveiling some of the secrets and surprises about Seville!

The History of Seville 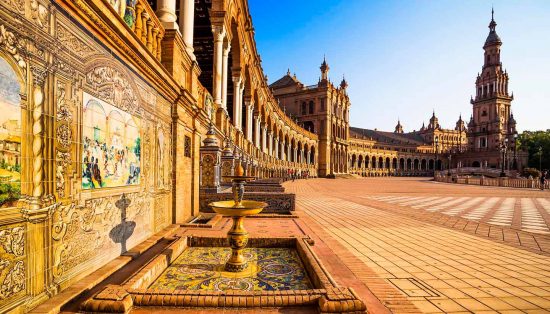 Seville first started off as an Iberian town, where it thrived under Roman rule from the 2nd Century BC onwards. It was known as Hispalis at the time. Then in the early 5th century the Silingi Vandals made it their seat of power, but it wasn’t long until the Visigoths took over in 461. However, it fell to the Muslims in 711 and was called Ixvillia. It wasn’t until 1248 that the Spaniards took over and it went by Seville.

Under the Muslim rule, from 711 to 1248, Seville flourished. It was an enormous cultural and commercial center. However, once the Spaniards began their rule, a vast majority of the Muslims and the Jewish people were forced into exile. Not cool, Seville.

Seville became a huge hub for trade and exploration of the Americas in the early 1500s. The House of Trade, called the Casa de Contratación was built in 1503 to regulate all the commerce between the Americas and Spain. For nearly 200 years Seville was the seat of power in Spain’s New World commerce.

During the time of New World Commerce and the House of Trade, Seville was actually the richest city in Spain! It had the largest population in all of Spain, clocking in at 150,000 inhabitants. In fact, Seville was the top site for minting gold and silver from the Americas.

Ready to book? Here are our favorite areas to stay in Granada, Spain!

The History of Seville’s Artists

Seville is home to more than one incredible artist! Namely, the 17th and 18th century painters like Diego Velázquez, Bartolomé Esteban Murillo, Francisco de Zurbarán, and the sculptor Juan Martínez Montañés. In fact, Diego Velázquez is universally accepted and acknowledged as one of the world’s greatest artists!

#6 – Anyone Want To Fight A Windmill?

A little known fact about Seville that we are just dying to share is that author, Miguel de Cervantes, first conceived the idea for this world-renowned novel, Don Quixote, during his time behind bars at Seville’s jail. Why jail? He had some bad luck with a banker. Sorry about the jail time, but happy about the book Mr. Cervantes!

Haven’t found what you’re looking for? Try our hotel guide for Mallorca, Spain!

The History of Seville and Tapas 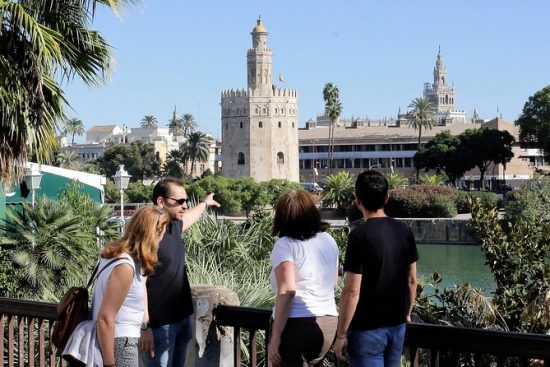 What would Spain be without their tapas? Those delightful and tasty nibbles and noshes to snack on before dinnertime are simply divine! Many parts of Spain claim that they are the birthplace of Tapas. However, we like to think that Seville has one of the strongest claims! Apparently, tapas were born when people used slices of bread and meat to put on top of their glasses between sips of their Andalusian sherry to keep flies from landing in their drinks. It wasn’t long until a variety of snacks were used to complement their sherry. In fact, the word tapas means “to cover” or “to top.”

In traditional Seville tapas restaurants, you can expect to find a lot of simple tapas that are comprised of local cheeses and Iberian ham. There are also a lot of stews served on top of bread. What’s best these days? Traditional tapas are still cheap! Usually between two to four euros for a tapa.

The History of The Seville April Fair 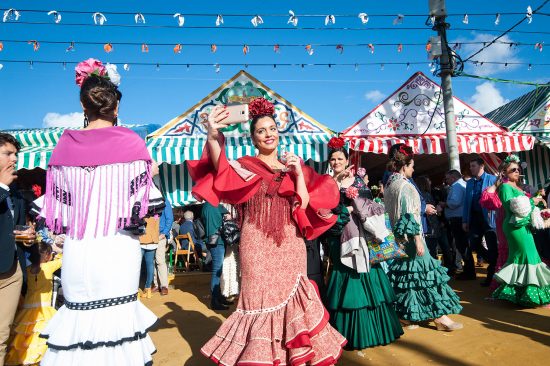 The April Fair is always held in Seville, and usually begins two weeks after Semana Santa, also known more commonly as Easter. The Fair runs for seven full days, and each day starts with a parade of carriages carrying the most important people in Seville to the bullring, La Real Maestranza. There are games, drinks, food, partying, and dancing! Sign us up, Seville!

The Seville April Fair first started in 1847. It was first organized as a livestock fair. The two founders proposed the idea for this fair to Queen Isabel II and she kindly agreed to their idea. The first fair was held on the very outskirts of Seville at the Prado de San Sebastián on April 18, 1847.

It wasn’t long before the fair became a big hit! In 1848, after just one year had passed, three casetas were set up. One by the Duke and Duchess of Montpensier, one by the Town Hall, and one by the Casino of Seville. Casetas are large marquee tents that are festively decorated and set up exclusively for the fair. The casetas are where the true parties happen!

If you’re going to Granada, take a look at some amazing things to do in Granada while you’re there!

This History of the Seville Cathedral 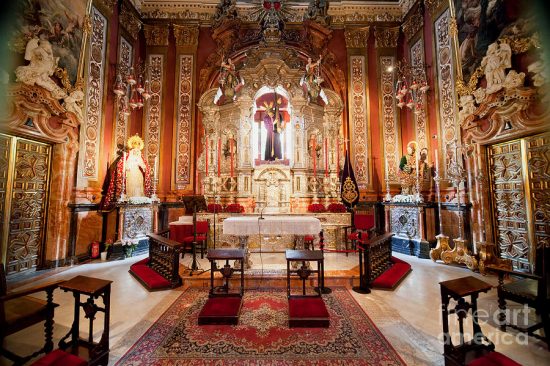 The Cathedral of Saint Mary of the See, also more casually referred to as the Seville Cathedral, was actually first built was the Almohad Mosque back in 1172. However, after the city was taken over by the Spaniards, the mosque was transformed into a cathedral. However, construction on the immense Seville Cathedral began in 1434 and was worked on until 1517.

Honoring the history of the cathedral, the construction workers and builders actually decided to preserve some elements from the ancient mosque instead of stripping it completely to rebuild the cathedral. The mosque’s sahn, also known as the courtyard for ablutions and cleansing has a minaret that was converted into a bell tower. This tower is called La Giralda, and is actually one of Seville’s most iconic symbols!

Have some time in Barcelona? These are our favorite day trips from Barcelona, Spain!

History of the Sevilla Futbol Club 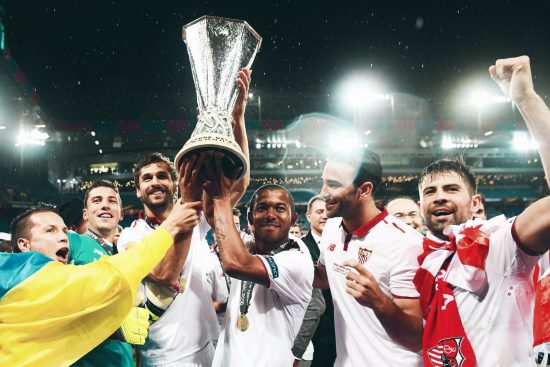 The Sevilla Futbol Club is often called simply, Sevilla FC. This is actually the oldest sporting club in all of Spain that is devoted to football! It all started back on January 25, 1890. The first club president wasn’t actually a native-born Spaniard, but instead a Scotsman!

The Real Betis Balompie is the other Futbol Club in Sevilla. It was founded in 1907 due to an internal split from Sevilla FC. The club received royal patronage in 1914 from King Alfonso XIII, which earned them the usage of “Real” in their name!

The History of Seville Population 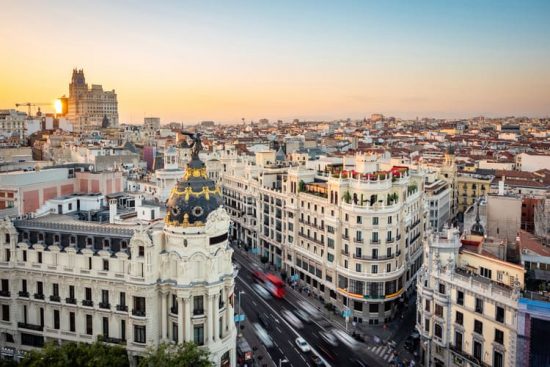 It was recorded that Seville had 150,000 inhabitants around the early 1500s during the time of Spain exploring America. However, in 1950 the population had only doubled in size to 373,000. While that’s a little more than a double, it’s still quite surprising that the number stayed so low for nearly 400 years!

Today, the population of Seville sits around 705,000. That number earns it the title of the fourth most populous city in Spain. If you were curious, the total area of Seville is only 50 square miles. Small in size, but packed with Seville pride— that’s for sure!

Editor’s Note: One of the best ways to get to know Barcelona is through its museums.

The History of Seville’s Royal Alcázar

The Royal Alcázar in Seville is the Royal Palace. The site was actually first a Roman settlement which later was taken over by the Visigoths, and then by the Arabs in 712. It was the work of the Arabs who transformed the site into a palace. When Spain claimed Seville again, the palace became Christianized. Further additions were made in traditional Spanish style throughout the centuries. The House of Trade was actually located in the Castle too!

Sometimes palaces can feel like museums. Not the Royal Alcázar of Seville! This palace is actually still in use by the royal family. It’s their official residence in Seville. So if you’re visiting, you might just catch a glimpse of some glamourous Spanish royalty. In fact, it is the oldest palace in all of Europe that is still in use!

#21 – The Courtyard of Maidens

What palace would be complete without a beautiful courtyard? The Royal Alcázar of Seville has a courtyard called the Patio de las Doncellas. This translates to the “Courtyard of Maidens.” Why the name? Well, it’s not because women just loved to lounge about around there. It is actually in reference to the legend that the Moors demanded 100 virgin women to be offered as tribute each year from Christian kingdoms in Iberia. Well, legends will be legends.

Final Thoughts on the History of Seville

The southern Spanish town of Seville, the capital of the Andalusia region, has quite a few tricks up her sleeve. From delectable tapas to vibrant festivals with the best parties at casetas, Seville is quite a Spanish star.

We hope you enjoyed discovering the history of Seville, along with all its facts! For one last fun fact, Seville has its very own secret code: NO8DO. According to local legend, this secret code as actually given to the city by King Alfonso X. Apparently this code means, “it has not abandoned me.” You can spot NO8DO around the whole city if you keep your eyes peeled!