21 AMAZING Facts about the History of New Orleans!

Bring on the parties, parades, and even a bit of voodoo magic! Alice, we are heading down the rabbit hole in the fantastical history of New Orleans!

As Louisiana’s most celebrated city, New Orleans is known for their incredible Mardi Gras parades, their delectable beignets, and for the distinct music scene. We all know that there is a lot of mystery and magic surrounding this vibrant city of New Orleans and its history.

So let’s see if we can consult a crystal ball, or maybe just our handy list below, and see what secrets we can uncover about the history of New Orleans!

The History of New Orleans 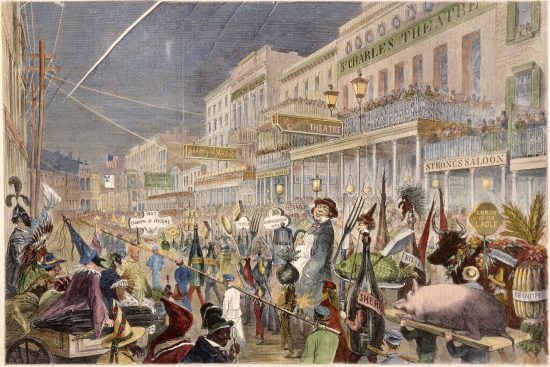 Apparently, the area that is today called New Orleans was inhabited by Native Americans for 1300 years. However, archeologists have found earthworks and mounds in the area that evidence that a settlement has been in New Orleans since 400 AD!

The French showed up in New Orleans around the 1960s and set up shop right along the Native Americans along the bayou. They named it: “Port Bayou St. Jean,” which would later be known as the Faubourg St. John neighborhood. And the French didn’t stop there! They erected a small fort called St. Jean in 1701. But the majority of French settlers left by 1710 because they couldn’t grow wheat. Oh the French and their bread! They simply can’t survive without a good baguette.

MUST READ! Find out where to stay in New Orleans for any type of trip or budget!

New Orleans was officially founded in 1718, by the French who had remained—wheat-free—in the area. They dubbed the land La Nouvelle-Orléans. The French chose this area due to its strategic location along a sharp bend of the Mississippi River that would give them direct access to the Gulf of Mexico without needing to travel 100 miles. Oh yeah, and it was at a safe distance from the other colonial settlements that the Spanish and the English had set up. We think you’re pretty nifty, but we respect your distance.

The History of How New Orleans Got Its Name 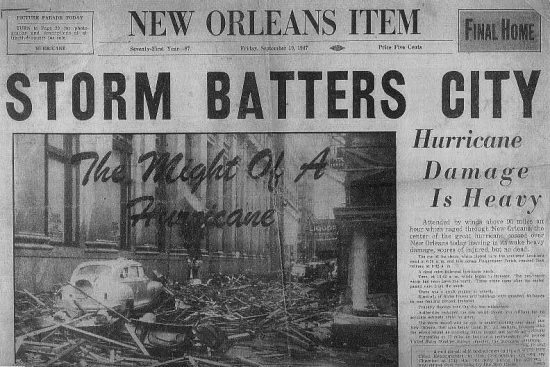 Since New Orleans founding in 1718 by the French, it was named La Nouvelle-Orléans. They chose this name to honor the beloved Regent of France, Philippe II, Duke of Orléans. Also, this duke is known for assembling the Orléans Collection, which is actually the finest collection of paintings every assembled by a non-monarch. Way to be a cool patron of the arts, Duke!

The History of Who Controlled New Orleans 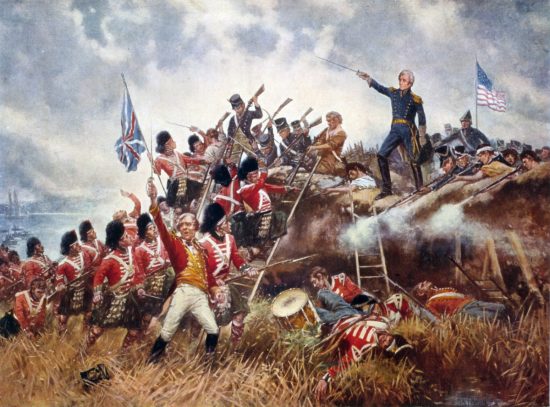 Not everyone is a fan of Napoleon, but we sure can all get behind him selling Louisiana, and more than a dozen other parts of contemporary US states, back to the United States in 1803. Thanks, Napoleon!

New Orleans is amazing! And these great hotels will blow your mind!

The History of the Population of New Orleans 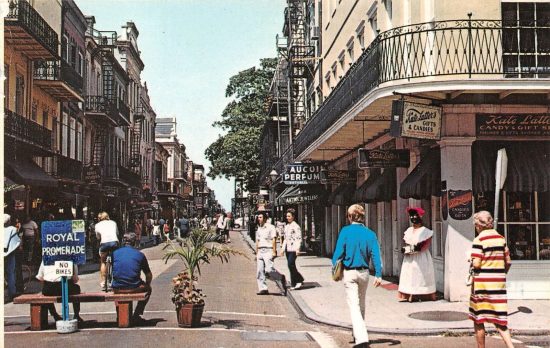 The first census of the New Orleans population was officially documented in 1805. The data reveals that there were 8,500 individuals living in New Orleans. According to the numbers, there were 3,551 whites, 3,105 slaves, and 1,556 free African-American persons. That’s quite a big mix.

Today, the number of people living in New Orleans is around 391,000, however the larger metropolitan area clocks in a population of 1.167 million people! It is still an enormously diverse and dynamic population— a true melting pot of a city!

If you’ve already booked, make sure you know about all the great things to do in New Orleans! 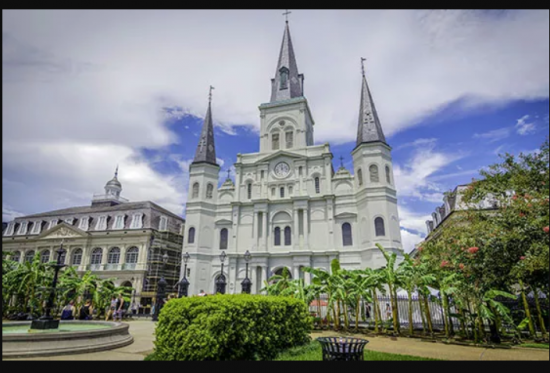 #9 – The Fiery Past of St. Louis Cathedral

The Great New Orleans Fire of 1788 decimated 856 buildings. Want to know what day it happened? Well, that would be on Good Friday. Seems like the time around Mardi Gras wasn’t always a time for parades and celebration! Then, in 1794 another fire destroyed a total of 212 buildings.

After these two huge fires, the city decided to build again… but this time with bricks instead of wood. Much of this 18th-century architecture can still be seen in the French Quarter today, including the glorious St. Louis Cathedral.

The St. Louis Cathedral is actually the mother church of the Archdiocese of New Orleans. In fact, it is the oldest continuously active Roman Catholic Cathedral in all of the United States of America. And, it was named after King Louis IX of France. These three facts are St. Louis’ big claim to fame!

Lots of famous people were buried in the St. Louis Cemetery. Who we find especially interesting is famed Voodoo priestess, Marie Laveau. Who has not yet been buried there? Well, that would be the American actor Nicholas Cage. Although, he has already bought an empty tomb at St. Louis so he can be buried there. Well, Nicholas Cage sure knows how to think ahead!

An old priest of the cathedral, Fr. Antonio de Sedella, was buried within the church itself. Okay, that seems pretty normal. What isn’t normal is that there have been multiple accounts of his ghost being seen during Christmas Midnight Mass holding a candle. Better a candle than… a knife? Apparently there is room for more than one ghost in St. Louis, as there have also been reports of a dead monk, Père Dagobert, being seen around the grounds. People even say they hear his voice chanting the Kyrie too, but only when it’s raining.

Excited to visit New Orleans? Get excited to take an amazing day trip too! 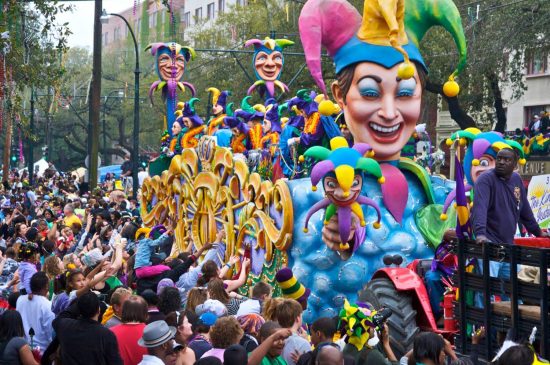 The first official Mardi Gras parade took place in New Orleans on February 24, 1857 by the infamous Krewe of Comus, a Carnival crew. This organization is actually still in charge of the Mardi Gras festivities in New Orleans today! They are to thank for the idea of including fabulous floats in the parade, too. If you were curious, it is the law that float riders wear a mask. That’s not just for fun, that’s the law!

The three colors of Mardi Gras might automatically come to mind when we mention the name Mardis Gras, but if not here they are for you: purple, gold, and green. The King of the Carnival, Rex, actually chose the colors himself in 1892, and they stuck! He decided that purple symbolizes justice, gold means power, and green stands for faith. Rex called it. We still go by it!

Insider tip – Use our expert guide to see when the best time to visit New Orleans is! 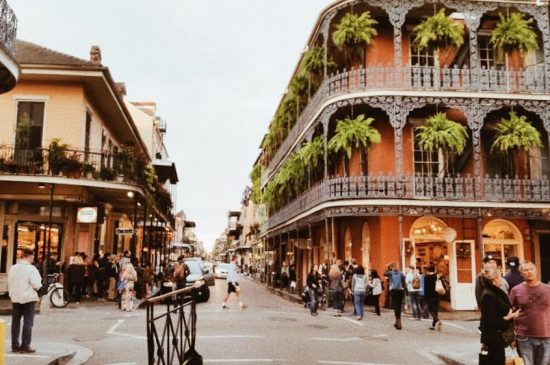 #15 – How Bourbon Street Got Its Name

Well, it wasn’t named after the whiskey! Back in 1721, one of New Orleans founders named the streets after the French royal houses, as well as for Catholic saints. Thus, Bourbon street was in honor of the royal House of Bourbon. So, it’s actually quite likely that the alcohol was named after this street, not the other way around!

#16 – When You’re Known For Your Air-Conditioning…

Bourbon Street, or more specifically the bars on Bourbon street, were one of the first commercial spaces to use air-conditioning in the 1930s. We all know, or can imagine, what the sweltering southern heat and humidity is like in New Orleans. It’s no wonder that they caught on early to air-conditioning!

Love to tan? Check out the 15 best beaches in New Orleans!

History of the French Quarter 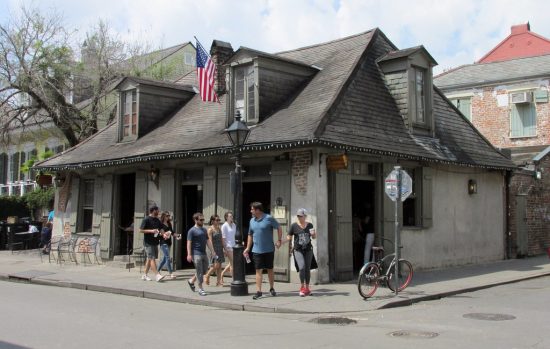 #17 – When Hurricanes Are The Reason For Urban Planning

In 1722, a huge hurricane hit New Orleans and knocked down the majority of buildings. The hurricane is to thank for the “grid structure” of New Orleans, which is evidenced in present day by the French Quarter. This six by thirteen block area is in the same layout as back in 1722!

The French Quarter is actually one of the oldest residential communities in the entire United States of America. It goes by another name as well, Vieux Carré, which means Old Square in French. We wouldn’t like to be called an old square, but it’s cool that they don’t mind! They sure are proud of their age!

Take a vacation! Let local tour guides in New Orleans do the planning for you! 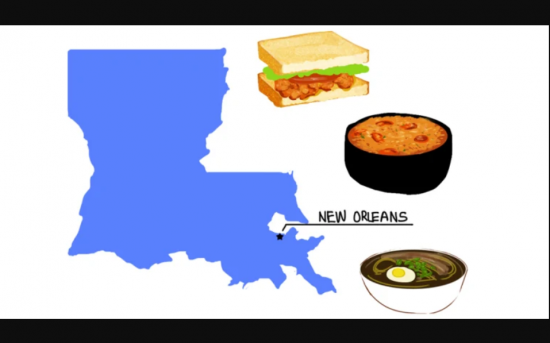 Given that New Orleans is such a huge cultural melting pot, it comes as no surprise that New Orleans’ cuisine is strongly influenced by Creole, Cajun, and soul food. Many dishes have been conceptualized and invented in New Orleans, from bananas foster to muffuletta to the po’ boy! Okay, now we’re drooling…

King Cakes are quintessential New Orleans! These cakes are baked with a small plastic baby inside. It is said that whoever is the lucky finder of this baby doesn’t get fame, fortune, or fertility for the next year. Nope, they just have to bring the cake next year. Bummer. 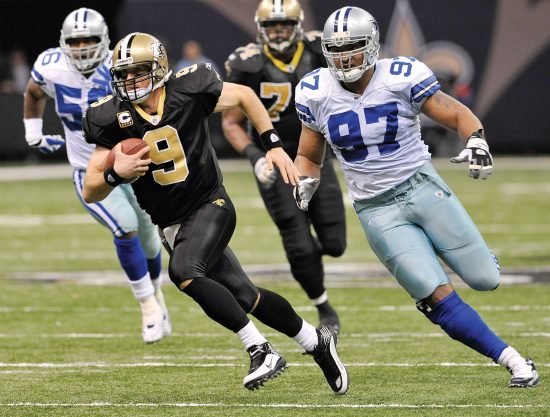 #21 – The Founding and the Naming of the Saints

The New Orleans Saints are a professional football team that compete in the NFL. The team was founded in 1967 by two businessmen and the city of New Orleans itself. They chose the name in honor of All Saints’ Day in the Catholic tradition. Fans typically sing, “When the Saints Go Marching In” during games too. Quality-name, Saints!

Final Thoughts on the History of New Orleans

New Orleans is a bright light of a city in the United States, famed for food, parades, nightlife, music, and so much more. We hope that this dive into the history of New Orleans proved worth your while, and that you didn’t find the burial sites or haunting too spooky! Since we haven’t seen any ghosts ourselves, we can’t attest to anything ourselves. If you’ve seen a ghost in New Orleans, please let us know in the comments below!