21 AMAZING Facts about the History of Edinburgh!

The capital of Scotland, Edinburgh, has quite an interesting story to tell. With history that goes all the way back to 8500 BC, Edinburgh isn’t a young babe at all but a valiant old lass!

Often referred to as the Athens of the North, this hilly capital has been the center of education, law, politics, science, and much more since ages old. As the first city in the world to have it’s very own fire service, and home to more trees per person than any other city in the United Kingdom, Edinburgh has more than a few secrets she’s ready to share!

Hungry for more? Let’s sink our teeth into the rich and juicy history of Edinburgh and sift through all the fun facts Edinburgh has to offer! Ready to find what nectar we can find in the sieve? Readers, read on!

The earliest known humans in Edinburgh were evidenced to have inhabited the area around 8500 BC. However, when the Romans showed up around the 1st century AD a Brittonic Celtic tribe was already situated there. Their name was documented to be the Votadini.

Edinburgh wasn’t actually always recognized as the capital of Scotland. In fact, Edinburgh replaced Scone as the capital back in 1437. Sometimes it takes time to recognize true greatness! Insert trumpet sound here.

Let’s simplify this! We’ve put together our favorite places to stay in Edinburgh so you don’t have to stress! 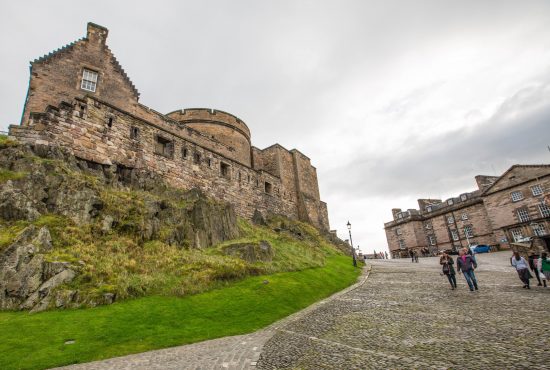 #3 – When Picking Where To Put A Castle…

When deciding where to build a castle, you should definitely find the right spot. This isn’t just a willy-nilly restaurant that can go anywhere! So when deciding where to build the castle back in the 12th century, they went for a pretty solid spot up on a hill overlooking the city below. The spot they chose is actually the site of a 700 million year old extinct volcano! Good thing that the volcano isn’t interested in erupting anytime soon…

Edinburgh Castle once had their very own puppy! Just kidding— that would be too easy. Edinburgh Castle was once home to an elephant! Apparently, after the Highlanders spent time in Sri Lanka back in 1838, they brought back with them an elephant as their regimental mascot! Usually, we just get magnets as souvenirs. Next time, someone bring us back an elephant please.

Throughout the ages, Edinburgh Castle has worn many different hats! She has been home to the royal family from the time she was built up until 1633. However, after that, the castle was predominantly used as a military barracks and then later as a prison. Turning the home of royals into a home for prisoners and felons is quite an interesting turn of events, don’t you think?

Not yet booked? Take a look at our favorite hotels in Edinburgh! 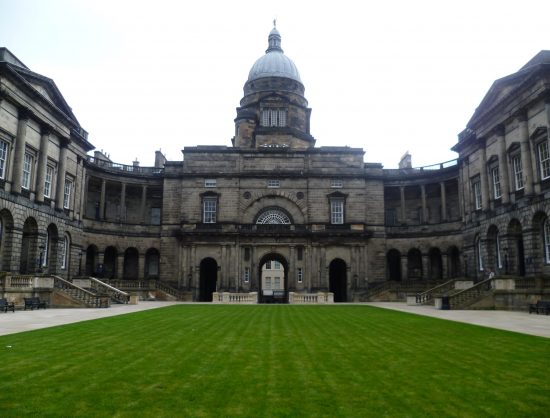 The University of Edinburgh was founded in 1582, making it the sixth oldest university in the world— well the English-speaking world for the matter. However, when it first opened its doors back in 1583, it was only a college of law. No other fields were taught until later!

The Edinburgh Seven is actually a group of female undergraduate students, who were the very first group of undergraduate female students in any British university. They began studying medicine back in 1869, however, unfortunately, all seven of them failed to graduate. Needless to say, that was a bummer. However, their campaign garnered national attention and put women’s rights to education on the national agenda. Legislation was enacted less than 10 years later to ensure women could study at the University. Bravo, gals! 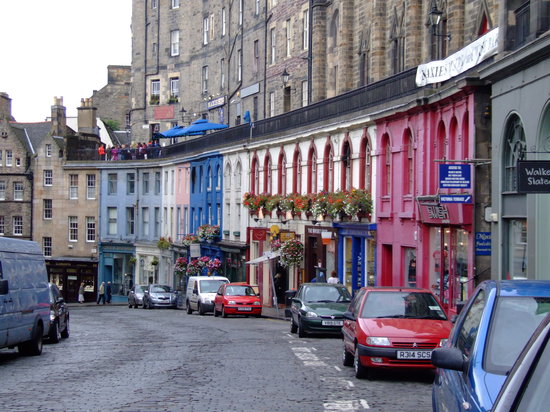 The Old Town in Edinburgh has certainly seen centuries of history. It is home to the Royal Mile, and many of the most historic and significant buildings in all of Edinburgh. However, the Royal Mile isn’t actually one mile long. Perhaps it is a tid-bit embarrassing, but it the Royal Mile is actually 107 yards long. Whoops!

#9 – If Streets Could Speak

In Old Town, you can find incredible buildings like the Old College of the University of Edinburgh and St. Giles’ Cathedral. However, underneath those beautiful cobblestone streets, there is a labyrinth of underground vaults and hidden passages. Who knows what went down under Old Town!?

Planning a trip? See our list of the best things to see in Edinburgh! 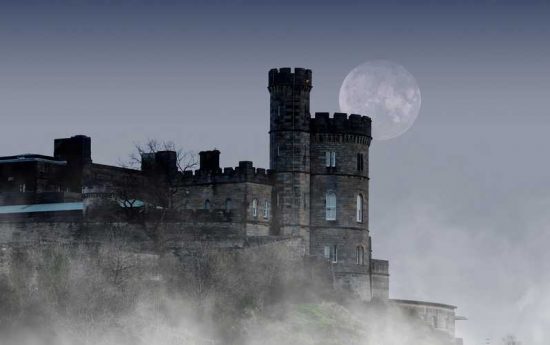 Well, this isn’t exactly the most pleasant of facts to share, but inside of Edinburgh’s walls, there are over half a million corpses. In fact, one of the scenic hills that tourists love to hike around is actually a mass gravesite. Yikes! Was that a rock you tripped over? Or a skeleton? Double yikes.

Nor’ Loch is the lake that sits at the foot of Edinburgh Castle. The waters aren’t crystal clear or anything, which sure won’t come as a surprise now that you know that it was the dumpsite for human waste and dead bodies for a grand total of 600 years!

Some people bring a bouquet of flowers to dinner, others bring a dessert, while some people bring dead animal heads. In 1440, at a dinner party, a giant black bull’s head was dropped in the middle of the table as a sign that it was time for the slaughter. Some of the Douglas clan was beheaded that night by the royals to keep the Douglas clan from getting too powerful. 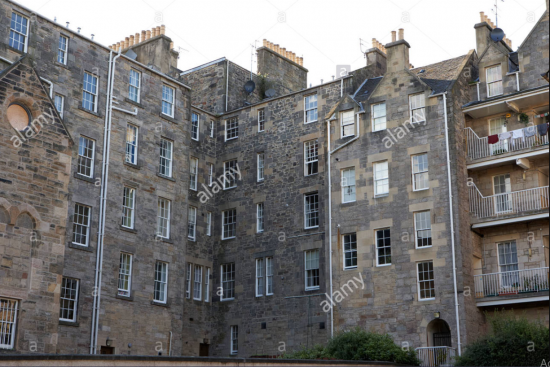 #13 – When The Tallest Buildings are Tenement Buildings

Even though the tenement buildings were that time’s version of skyscrapers, they were densely populated and very unsanitary. Supposedly, it was documented in 1862 that 1,530 people lived in a single home which normally housed just six to fifteen people. How that is possible? We just can’t imagine!

Have some time in Edinburgh? These are our favorite day trips from Edinburgh! 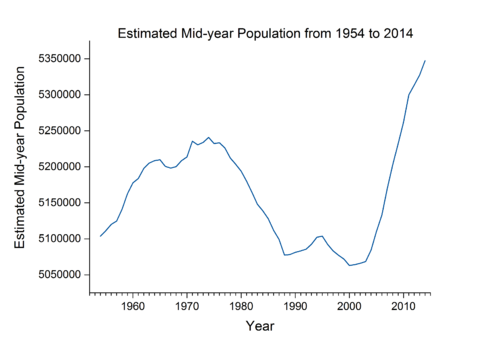 In present times, the estimated population of Edinburgh is just over half a million. However, the population in 1950 was roughly under half a million. There hasn’t been much population growth, just 1.17% per year in the last fifty-plus years. That’s not much growth at all when you think about cities like Hong Kong or New York! 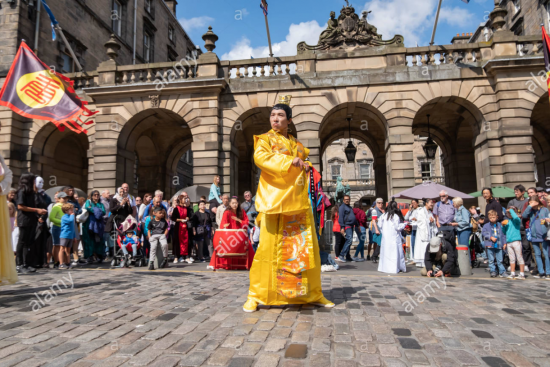 There was once a man who went by Rudolf Bing who wanted to create an international festival based in the United Kingdom. In 1945, a committee decided on Edinburgh to be the home of this epic cultural festival, that would apparently make Edinburgh the ‘cultural resort of Europe’ post-WWII. When the first festival was hosted in 1947, the goal was to provide a ‘platform for the flowering of the human spirit.’

The Festival Fringe emerged ever since day one! During the first International Festival back in 1947, eight theatre companies from Scotland and England appeared completely uninvited and staged their own shows. All eight groups actually operated independently of each other, no shouldering sharing responsibilities on the fringe!

It didn’t take long to coin the phrase “fringe.” Just one year after the inaugural festival took place, a journalist and playwright wrote: “Round the fringe of official Festival drama, there seems to be more private enterprise than before … I am afraid some of us are not going to be at home during the evenings!” Ever since he penned that line, the name fringe stuck and became known as the Fringe Festival that runs alongside the International Festival every year.

What do you like? Because we’ve catered a list of the top tours in Edinburgh for all interests! 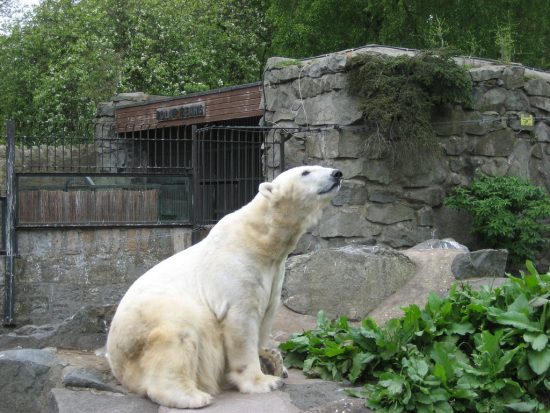 The Edinburgh Zoo is the first zoo in the entire world to house and breed penguins. In fact, the world’s only knighted penguin lives at Edinburgh Zoo. His name is Sir Nils Olav and he was knighted in 2008. Now that’s a proper penguin!

The founder of the Edinburgh Zoo is actually a lawyer! This Edinburgh Lawyer was an animal enthusiast and he raised enough support and money to open the zoo in 1913.

Wojtek the bear was adopted but he 22nd Company Polish Army Service and Corps in 1943 and was enlisted as an honors soldier in 1944. Apparently an Iranian boy traded the bear for food. After Wojtek the bear’s time in service to the war, he lived out his days happily at the Edinburgh Zoo!

History of the Palace of Holyroodhouse 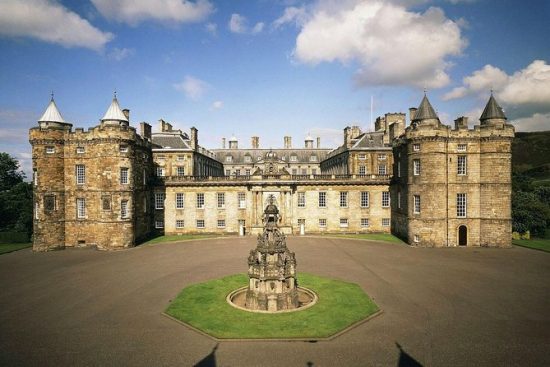 Holyroodhouse is the official residence of the British monarch of Scotland, Queen Elizabeth II. It was actually first founded as a monastery in 1128. Monks are not exactly known for being fancy or anything, but apparently what is good enough for monks is good enough for queens!

Final Thoughts on the History of Edinburgh

From soldier bears to knighted penguins, Edinburgh is filled with plenty of curious and bizarre things to discover! Just maybe don’t dig too deep into the dark history of Edinburgh. There are just too many skeletons still around that it’s better not to go looking in any more closets!

About the Author Aaron Hovanesian

Born in Los Angeles, Aaron Hovanesian is one of the original staff writers for Hotel Jules. Having backpacked the world as a young man, Aaron now prefers to travel the world in luxury, proudly staying in the world's most amazing hotels and properties. When Aaron is not traveling he lives in Western Colorado he can be found brewing his own beer (probably an IPA) or spending time with his two amazing golden retrievers.