21 MUST KNOW Facts about the History of Athens!

Has anyone seen Aphrodite walking around lately? Well, if you’re interested in the history of Athens, maybe we should focus more on the goddess the city was named after: Athena.

Athens is the capital city of Greece and is a bustling metropolitan city that is heaped in ancient history. Just take a peek at the acropolis that stands tall on the rocky limestone outcrop above the city and say hello to ancient history!

Let’s take a walk along memory lane, probably paved in marble after all, and see what fun facts we can unearth about the ancient city of Athens!

The History of Ancient Athens 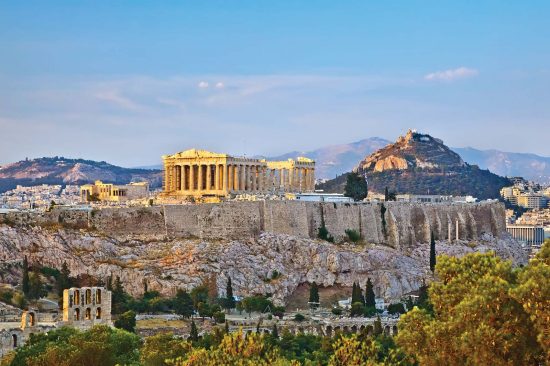 Athens has been inhabited ever since 3000 BC, which is evidenced by pottery found around the acropolis. Anyone need an ancient pot or vase? They may be in broken pieces, but these things are ancient!

The earliest buildings that can be found in Athens dates back to 1200 BC, which includes a small part of the Acropolis itself! Around 1000 BC to 750 BC Athens began to spread northwest, however one of the largest periods of expansion for Athens was the 6th century BC!

In 480 BC the Persians captured and largely destroyed the city of Athens. Only a few buildings were spared! However, Athens returned later and immediately rebuilt their fortifications and they continued to rebuild for 30 years after the Persian mayhem.

The History of Athens Democracy 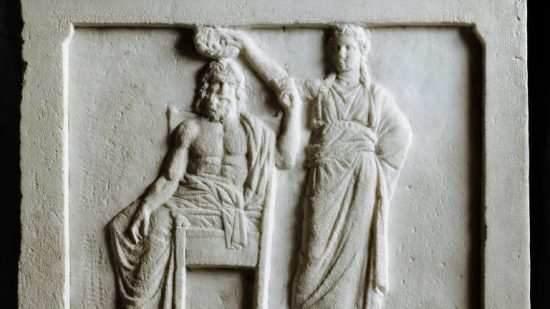 #4 – The Birthplace of Democracy

Democracy was formulated and established in Athens around the year 500 BC. If you were curious, it was the first time in all of history in which eligible citizens could directly vote on laws. #RockTheVote

#5 – Giving Everything A Try

Given Athens ancient history, and as it is often referred to as the birthplace of democracy, maybe it doesn’t come as a surprise that these smart humans gave nearly every single form and type of government a try! They’ve given a go at democracy, socialism, monarchy, capitalism, and they even had a brief stint with communism! Before settling on democracy, they sure did give the other options a proper try.

Will you also visit Athens? We know great places to stay in Athens too!

The History of Athens and Sparta 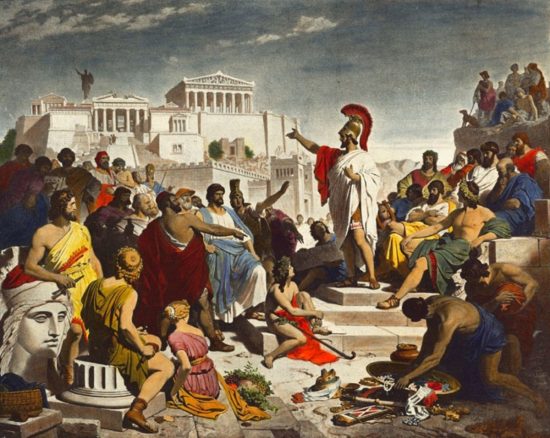 Sparta was a warrior society in Greece that defeated it’s rival, Athens, in the Peloponnesian War that took place from 431 to 404 BC. Spartans are actually not from Athens, but originally from Laconia, an area in the South of Greece. This warrior society began training of the boys to become soldiers at age seven! Start them early, Spartans!

Since the men were professional soldiers, and the women were not in the military, women actually enjoyed more status and freedom than other Greek women. They were even educated! Although Athens was the center of learning, the women in Sparta were more educated than Athenian women during those times. Curious and curiouser…

The Biblical History of Athens 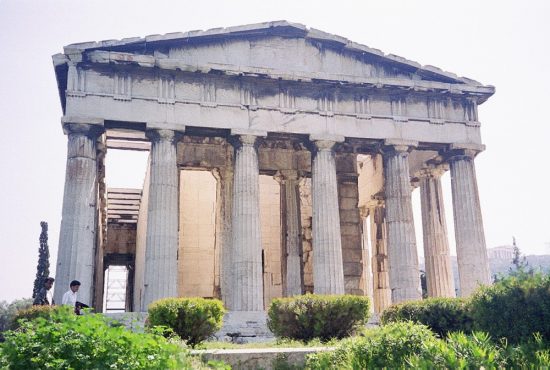 In terms of Christianity, a religious route in Greece that is rather remarkable is the “Route that Apostle Paul Followed in Greece.” The Apostle Paul spread the word of Christianity and taught people all about Jesus’ mission all over Greece. He traveled extensively throughout Greece, including Corinth,Thessaloniki, and of course the great city of Athens!

In the year 51, the Apostle Paul made it to the city of Athens. Sometimes, Paul was chased away for his teachings. However, that certainly wasn’t the case in Athens! Paul was brought to the High Court so he could preach formally and he was asked to explain everything in greater detail. When Paul speaks, Athenians listen.

While the Apostle Paul visited Athens in the year 51, it sure did take him a long time before he got his own church in Athens. Nearly 2000 years! The Apostle Paul’s church was erected in 1887 near the heart of Athens.

Let’s make this simple. These are the best hotels in Athens!

History of the Acropolis 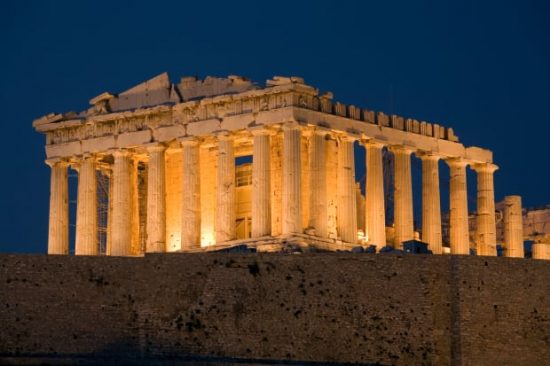 The Acropolis’ flat top is due to thousands of years of construction. The first documented construction was the Mycenaeans building a compound enclosed by a large wall back in the Bronze Age. Then the Athenians built two temples in the 6th century in honor of the Goddess Athena.

In 480 BC the Persians nearly demolished all the buildings on the top of the Acropolis hill. The Athenians, being the smart people that they were, hid sculptures inside caves to prevent the Persians from stealing them or destroying them! Storing art in caves, now that’s an idea.

After the Persians wrecked things, the Acropolis actually entered a Golden Age between 460 and 430 BC in which Pericles initiated a huge building project on the Acropolis which included rebuilding the Parthenon, the Propylaea, the Temple of Athena Nike, and a couple of other buildings up there on the hill too. Atta boy, Pericles!

If you’re going to Athens, take a look at some amazing things to do in Athens while you’re there!

Athens and the Olympic Games 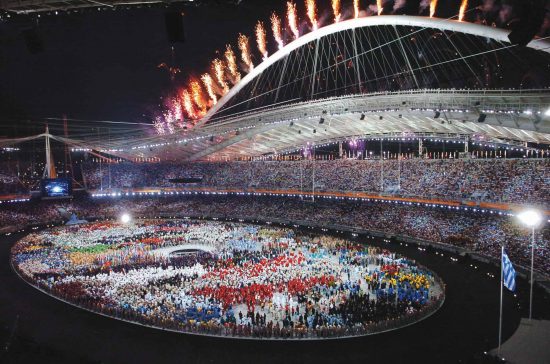 #15 – Claim to Olympic Fame: The Marathon 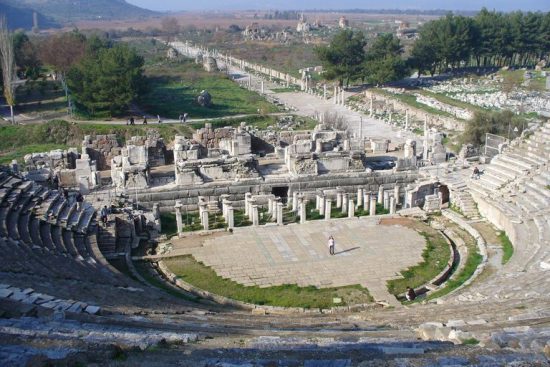 Athens actually has the most theatrical stages in the entire world. There are a total of 148 theatre stages. If you were curious, there are around 50 stages that make up New York City’s Broadway. Broadway doesn’t have anything on Athen’s stages!

Ancient Greek theatre actually began with festivals honoring their gods. Men would sing songs and perform plays at such festivals. Of course, Athens was the center of all the theatre fun!

Excited to visit Athens? Get excited to take an amazing day trip too! 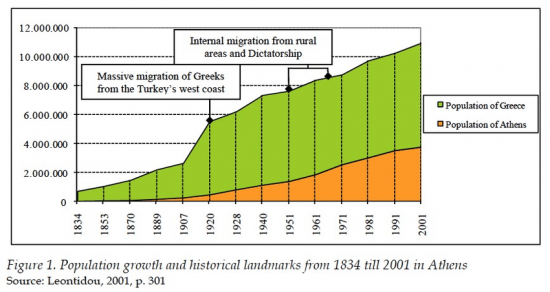 Pretty impressive that we have these really old numbers documented isn’t it? Well, take this on for size, during the classical period between the 5th and 4th centuries BC, Athens had a population somewhere between 350,000 and 610,000! While those numbers are huge for the BC era, in case you were curious, today the population of Athens is over 3 million!

The olive tree is sacred to Athens, and has been growing in Athens for thousands of years. Some of the oldest olive trees in Athens that are still alive and kicking were planted in the 1200s. These trees are still producing hearty olive harvests to this day!

According to ancient mythology, the Greek god Poseidon and the greek goddess Athena both wanted to be the patron of the city of Athens. They each had to offer up a gift to the people of Athens to win their favor. Athena gave the olive tree and Posideon gave salt water. Since Athens already had plenty of water from the surrounding sea, the Athenians rallied their support behind Athena. That’s why the olive tree is beloved to Greeks, and particularly to Athenians!

Take a vacation! Let local tour guides in Athens do the planning for you!

Final Thoughts on the History of Athens

We all know that Athens is an ancient city packed with beyond interesting ancient history. From the Acropolis to the Olympic Games, Athens sure has a story to tell! Good thing they have 148 theatrical stages to tell it on!

We hope you enjoyed learning more about the history of Athens with our 21 fun facts. So if you’re planning a trip to Athens, take a shot of ouzo and enjoy a plate of moussaka and impress all your friends with these 21 facts about the history of Athens. You’re a real Athens buff now. If you win any trivia games too, make sure to let us know! We’ll send a digital high-five your way!