21 MUST KNOW Facts about the History of Abu Dhabi!

Oh the rich, luxurious, and desert filled land of Abu Dhabi. As the largest of the seven emirates of the United Arab Emirates, Abu Dhabi is rich in oil fields, making it one of the top-two most wealthy emirates. While Dubai is all that and a bag of chips, let’s see what secrets we can find about the national capital of the UAE,  Abu Dhabi.

For starters, Abu Dhabi has been the filming location for films like Star Wars: The Force Awakens, Furious 7, and Sex and the City 2. To top it off, the Gulf waters of Abu Dhabi is home to the world’s largest population of Indo-Pacific humpbacked dolphins. While you might not be interested in Hollywood movies, or in dolphins, there’s more to Abu Dhabi than just oil and deserts.

Curious to know more about the capital of the UAE and see what historical gems we can unearth? Let’s deep dive into 21 fun facts about the history of Abu Dhabi! Away we go!

The History of Abu Dhabi 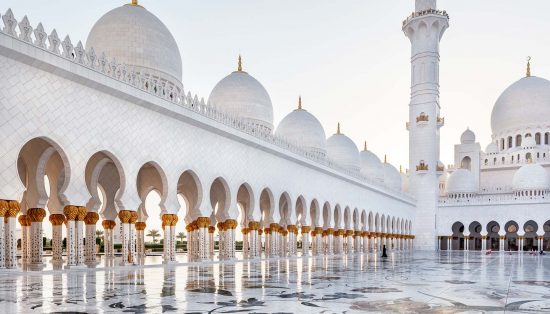 The land that comprises present day Abu Dhabi is actually full of plenty of archaeological evidence from ancient, and we mean ancient, civilizations. How old are we talking? Well third millennium BC. Is that old enough for you?

Curiously enough, the name Abu Dhabi translates to something pretty surprising— “Father of Gazelle.” While why this name was chosen is kind of a mystery, the best guess of an idea was simply because there were tons of gazelles in the area. Okay… but who was the father?

Before oil fields were discovered, the primary industry in Abu Dhabi was actually pearl diving. Divers would hunt for pearls in the Persian Gulf and bring home those dazzling white pearls for trade. After synthetic pearls became a thing, pearl diving took a real hit in the mid-1930s. So Abu Dhabi had to figure out another way to earn money…good thing they found oil! Oil was officially recorded as being discovered in 1958 in Abu Dhabi.

Abu Dhabi is the capital of the Emirates, and it is by far the largest. It actually occupies almost 75% of the land that makes up the entire UAE! It is the second most populous city in the UAE. This advanced metropolis is the center of the UAE’s politics and of their oil industry.

The History of Abu Dhabi Population 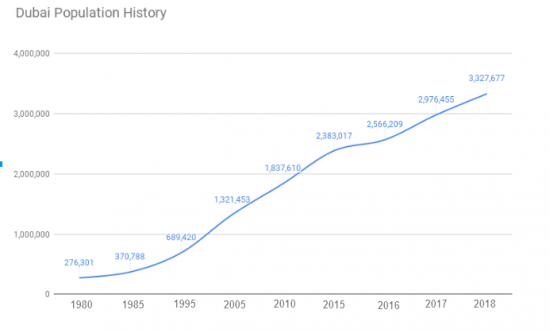 In 1950, the population of Abu Dhabi was 4,000 people. Just five years later, it doubled. From then on out, for quite a few decades, the population just kept doubling. It stopped doubling in 1985, but from there on up in kept steadily increasing and now sits at a whopping 1.45 million people!

Going from a tiny, ethnically homogenous community of pearl divers into a massive cosmopolitan, diverse powerhouse of a city is quite the surprise! Iranians were the first ethnic group to arrive, in the early 1900s. Then people from many countries in  Asia and Europe arrived predominantly in the 1950s and 1960s. Today, approximately 80% of the population of Abu Dhabi are actually expatriates.

The History of Abu Dhabi and Cars 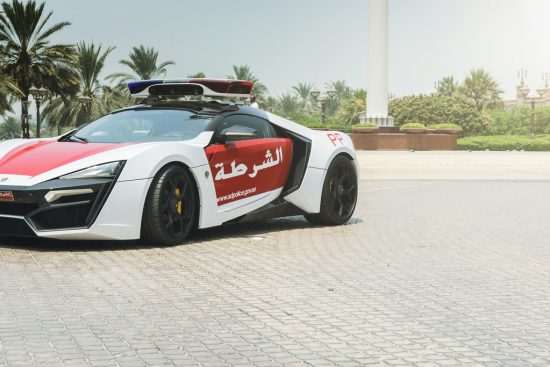 The Formula One, or F1 Races, are held each year in Abu Dhabi ever since 2009. On an island, the Yas Marina Circuit holds the event each year in November. These Formula One Motorsport races are spectacular to witness and are a huge draw for thousands of tourists each year. In case you were curious, the Yas Marina Circuit costs 3.6 billion AED to built! Actually, the track can be split into two separate tracks which can host two races at the same time!

#8 – Abu Dhabi: All About Automobiles

The Ferrari Theme Park opened in 2010 in Abu Dhabi and is a wonder! It features various rides that are renowned for their breakneck speeds. The roller coaster at the Ferrari Theme park, called the Formula Rossa, is regarded as the fastest roller coaster in the world! It is 2.2km long and can reach a speed of 240 km per hour.

What does the police force in your country drive? Probably a Toyota or something fairly standard, right? Well, the police officers in Abu Dhabi drive Ferraris! Not only that, but their fleet of cars includes Lamborghinis and Rolls Royces. Talk about being outfitted in style!

Let’s make this simple. These are the best hotels in Abu Dhabi!

The History of Abu Dhabi Architecture 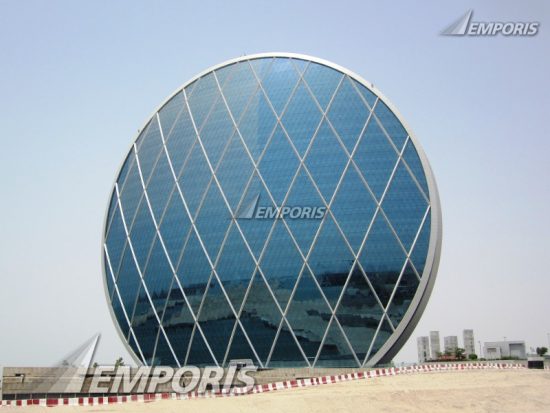 A ton of the glorious buildings that are seen today in Abu Dhabi are all thanks to the Japanese architect Katsuhiko Takahashi. The city was planned by Katsuhiko Takahashi and the Sheikh Zayed, who was the President at the time. They built it to house 40,000 people back in 1967. However, we all know that that number sure isn’t workable here in the 21st century!

#11 – The Oldest Building in Abu Dhabi

Built by the Bank Yas tribe, the Qasr Al Hosn is the oldest building in Abu Dhabi. While it was once a palace and the seat of government, now it is a museum that showcases the history of Abu Dhabi.

#12 – Even More Lopsided Than Pisa

We have all heard about the leaning tower of Pisa, but how about the Capital Gate of Abu Dhabi? The Capital Gate is actually the most lopsided building in the entire world. It leans a total of 18 degrees, which is simply baffling!

History of the Sheikh Zayed Mosque 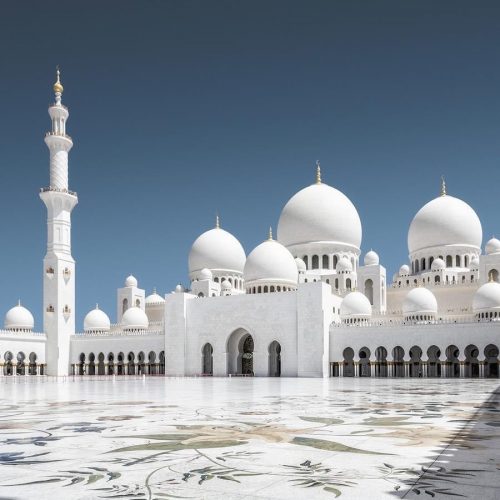 The grand mosque was built by and named after the Sheikh Zayed. This incredible structure can house up to 41,000 worshippers at the time! What is this mosque’s real claim to fame though, is that it is home to the world’s largest carpet. The carpet weighs 35 tons and it spans 60,570 square feet. If you were curious, that means it weighs as much as nine elephants!

The Sheikh Zayed Mosque was actually constructed with materials from all around the world. In fact, there are materials from countries such as Germany, India, Italy, Turkey, China, and Morocco. These materials include gold, stone, marble, and crystals. Not to mention the numerous crystals and semi-precious gems! Construction first started in 1996 and was completed in 2007. It took 3,000 workers to complete it!

The History of Religious Tolerance in Abu Dhabi 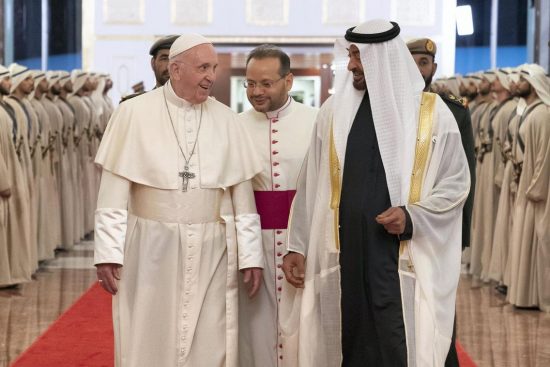 Given that Abu Dhabi is a multicultural, exceptionally ethnically diverse place, it is fortunate that those in charge are in favor of religious tolerance. While there have been some churches present for many years, in 2019 there was a special initiative named “A Call for Harmony.” In fact, the construction of the UAE’s very first synagogue was approved! As well as the first ever traditional Hindu temple. Way to go, Abu Dhabi!

The History of Abu Dhabi Opulence 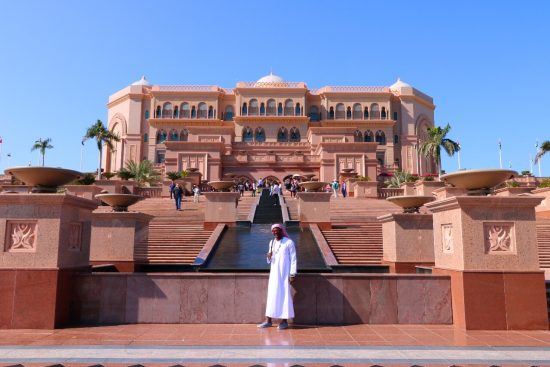 Abu Dhabi is all about luxury. So why not go to a vending machine and buy bars of gold? There are actual kiosk-type machines that dispense solid gold bars. Feed in your money and out pops gold bars. Usually, people just want a Snickers or a Gatorade, but in Abu Dhabi, they’re craving pure gold!

A man in Abu Dhabi, Saeed Abdul Ghafour Khouri, officially earned a new world record. And we’re sure he’s proud of it. He paid 14.3 million dollars for the license plate that simply has the number “1” on it. That’s the most money anyone has spent on a license plate, well, ever. We hope you’re satisfied with your purchase, sir!

There is actually a second Louvre that calls Abu Dhabi home. In fact, the city of Abu Dhabi paid a grand total of $525 million for legal rights to the name. And to date, they have spent over $747 million to pay for art loans from France’s Louvre, as well as for management advice. Who can really put a price on art though!

Abu Dhabi is the richest city in the world. There are a total of 420,000 citizens who are estimated to be worth approximately $17 million per person. While there are foreign workers, of course, these workers don’t share in the wealth. Sorry folks!

Not sold on Abu Dhabi? There are some incredible things to do in Abu Dhabi that won’t believe!

The History of the Emirates Palace 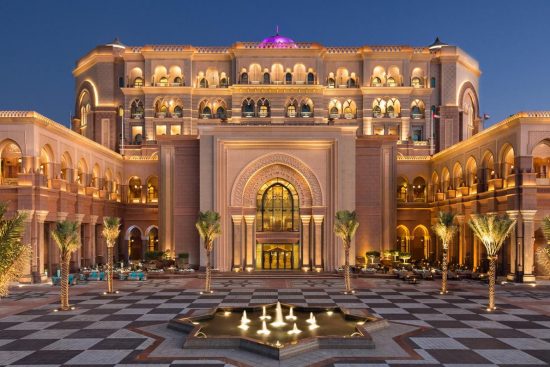 While the Emirates Palace wasn’t built for a king, it sure is fit for one! The Emirates Palace is a luxury hotel that opened just a handful of years ago in 2005. It only took four years to complete construction and cost 3 billion USD. It is the third most expensive hotel that has ever been built. It’s beat out by the Cosmopolitan of Las Vegas and the Marina Bay Sands in Singapore.

Apparently five stars just wasn’t enough for the Emirates Palace Hotel. This hotel was awarded seven stars instead of just a 5-star rating! It is the second 7-star hotel in the world, following the Burj Al Arab in Dubai.

Final Thoughts on the History of Abu Dhabi

As the richest of the Emirates, Abu Dhabi, sure has more than one claim to fame. From luxury sports cars to oil fields, to gold-bar vending machines, you might just find it all in Abu Dhabi.

We hope that our list of 21 fabulous facts about the history of Abu Dhabi caught you off guard or took you by surprise. We couldn’t quite squeeze in all of our favorite fun facts, so here’s just a couple more fun ones for you. What can we say, we’re feeling generous! We’ll dial it back to the year 2015. In that year, Abu Dhabi produced 93,075 tons of dates and was home to 383,887 camels. That’s a lot of dates and a lot of camels!