The capital of the state of Massachusetts, Boston was founded in 1630, making in one of the oldest cities anywhere in the United States. This east coast city played an important part in the American War of Independence against Britain, and its rich historic legacy has long been an attraction to tourists, alongside a growing reputation as one of the finest places in the USA to grab a meal or enjoy a night out.

With all this in mind, what is the best time to visit Boston? We’ll help you answer that question, not only giving you the lowdown on the weather in a month by month breakdown, but also giving you information on when the city is at its most crowded and most expensive. Not only that, but we also provide a calendar of the most popular events that take place in the city each year.

When is the best time of year to visit Boston?

As with many cities on the eastern seaboard of the United States, the best time of year to visit Boston is usually thought to be the high summer months stretching through to the first months of fall.

The summer events calendar – with many taking advantage of the good weather – make these months a great time to visit despite the higher accommodation costs and increased number of other tourists you’re likely to encounter. 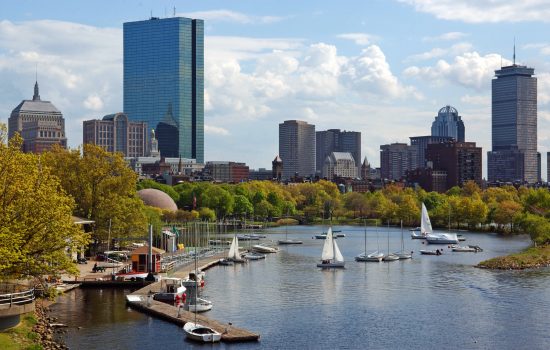 This is our INSIDER GUIDE for the best times to visit Boston!

The beginning of fall remains warm enough to make walking the chic streets of central Boston a delight, and this time is often described as the city’s shoulder period. There’s another at the beginning of spring.

Known for the deep snows that come with winter on this side of the United States, its still very possible to visit Boston during the winter, when the air is crisp and the city sees no more rain than at any other time of the year.

While nowhere in the world is 100% safe, as long as you use your common sense, you’ll likely be fine in Boston.

Having said that, you should NEVER travel without proper travel insurance. We’ve tested all of the best travel insurance providers, and World Nomads is our favorite! Fill out the form below to get a quote for your trip to Boston so you can keep yourself (and your belongings!) covered and safe 🙂


What months are the best time to visit Boston?

We can split this particular question into two parts, referring to weather and tourist numbers in turn. June through to September are undoubtedly the best months of the year to visit Boston when it comes to the average weather conditions. During these months, temperatures don’t drop below averages of 57°F (14°C), with highs peaking at 81°F (27°C) in July. Unsurprisingly these months are also the peak tourist season, with higher hotel prices as a result.

Avoiding the school holidays in July and August will help you avoid the most expensive prices, with the city’s two shoulder periods, roughly coinciding with the months of May and October good alternatives. Below we provide a detailed breakdown of the weather, month by month. 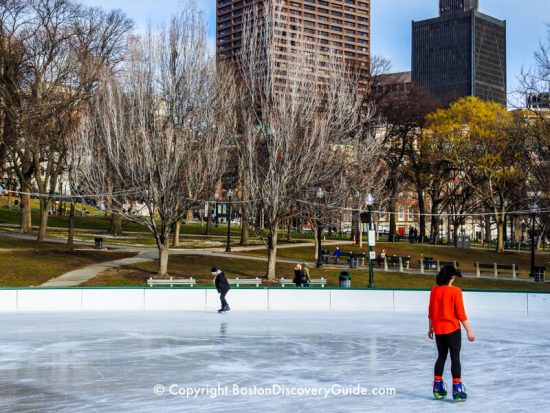 Read below for information about Boston weather in January (Photo credit – boston-discovery-guide.com)

The coldest month of the year, January sees temperatures that never depart far from freezing point, with highs of 36°F (2°C) and lows of 23°F (-5°C), although in extreme circumstances this can drop right down to -4°F (-20°C). You’re likely to see snow for around a third of the month, with the snowpack up to 10 inches deep, lingering due to the short daylight hours that last around six hours.

Need more specifics? Find out where to stay in Boston based on what you want to do there! 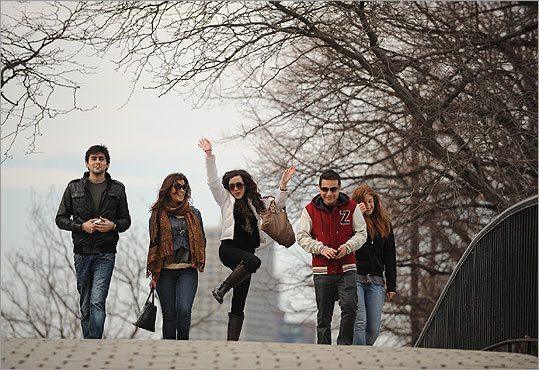 Read below for information about Boston weather in February (Photo credit – archive.boston.com/)

There is a hint, but only a hint, that temperatures are on the rise in February, with temperatures shifting fifteen degrees between highs of 39°F (4°C) and lows of 25°F (-4°C). Rain and snow fall are similar to that in January at around 3.5 inches falling over eight days, while snow cover drops to around 4 inches in depth.

Not sure where to say? We’ve put together a list of Boston’s best hotels! 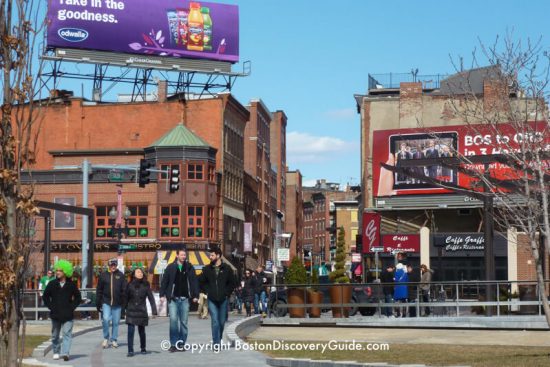 Read below for information about Boston weather in March (Photo credit – boston-discovery-guide.com)

Snow is still a possibility during the first half of March, but a rarity later, to be replaced by an average of 3.5 inches of rain. Though the days remain short, especially compared to Boston’s summer months, the temperature rises to 46°F (8°C), with lows just below freezing at 30°F (-1°C).

Let’s make this simple. These are the best hotels in Downtown Boston! 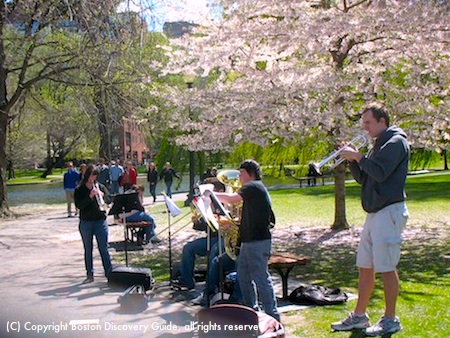 Read below for information about Boston weather in April (Photo credit – boston-discovery-guide.com)

Although April is acknowledged as Boston’s wettest month of the year, in reality there is very little difference to any other month, with the average amount of rainfall rising just slightly to 4 inches. Temperatures hit double figures in Celsius for the first time in the year, with average daily temperature highs of 55°F (13°C).

Excited to visit Boston? Get excited to take an amazing day trip too! 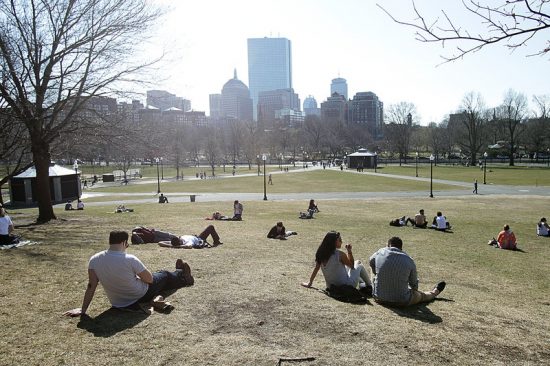 Read below for information about Boston weather in May (Photo credit – npr.org)

Boston weather in May

Spring makes itself known with longer days, of around eight hours, and average highs of 66°F (19°C) and peak highs of around 72°F (22°C). Rain showers are generally lighter than those of April, although as the total amount of rain that falls remains pretty constant, showers are more frequent instead.

Boston events in May

Do you have an open schedule? Figure out the best things to do in Boston before you visit! 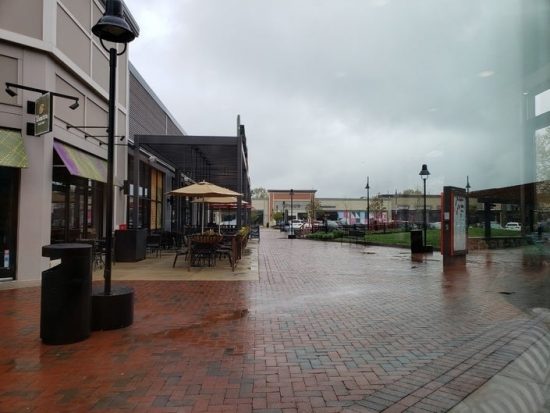 Read below for information about Boston weather in June (Photo credit – patch.com)

Boston sees average daily temperatures through the month of 75°F (24°C), with daily peaks hitting above an impressive 86°F (30°C). Evenings are warming up too, and sun set shifts back further so that visitors are able to enjoy more than 10 hours of sunshine per day. When it comes to rain, you can expect an average of 3.5 inches, like much of the rest of the year.

Planning a trip to Boston? Have a look at the top places to visit for inspiration! 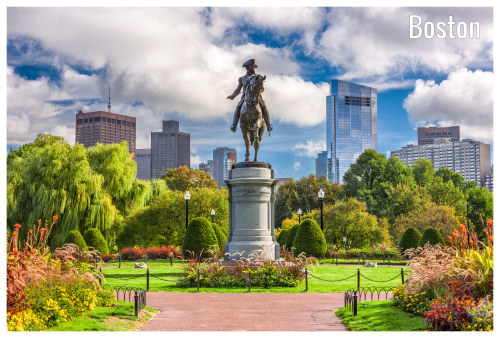 July is Boston’s hottest month, with evening temperatures still hovering close to 68°F (20°C) and daytime highs that can peak at 86°F (30°C). Higher levels of humidity also add to the discomfort of some, particularly during the afternoon hours. Rain fall is slightly lower than other months, with an average just over 3 inches falling.

Editor’s note – These are the 15 most beautiful beaches in Boston! 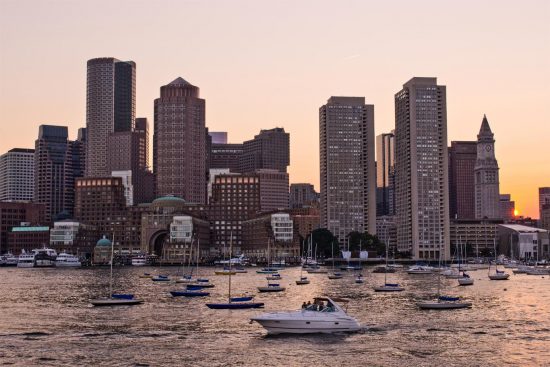 Overall weather conditions in August are similar to those in July, although temperatures are slightly lower than their July highs, with daytime averages peaking at 81°F (27°C). If you’re heading for the coast to get out onto the water, August sees the highest water temperatures of the year, at around 68°F (20°C).

Need to move your legs? Take a walking tour in Boston! 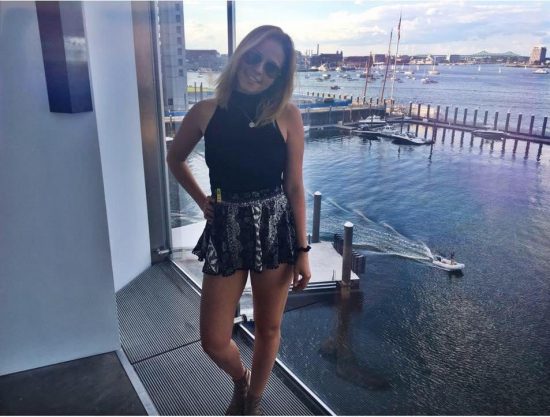 Read below for information about Boston weather in September (Photo credit – thetab.com)

Seeing some of the least rain fall of the year, with just 2.75 inches falling throughout the month, September also remains largely warm. Temperatures range from highs of around 73°F (23°C), to lows of 57°F (14°C), ensuring it’s still warm enough to explore the city free of heavy coats and scarfs. 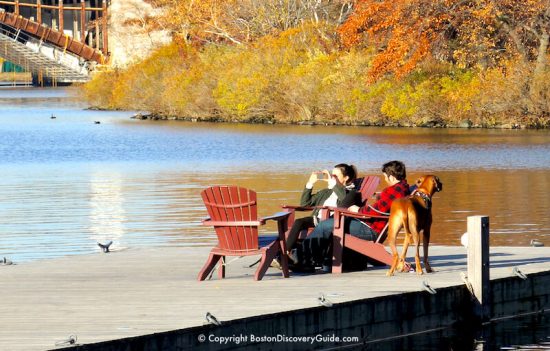 Read below for information about Boston weather in October (Photo credit – boston-discovery-guide.com)

Occupying the position as Boston’s second shoulder period of the year, October also sees the fall foliage at its most vibrant. That said, the days are now noticeably shorter than they were during the summer, and temperatures make a steady decline, so that you’re unlikely to experience anything higher than 61°F (16°C). The amount of rain fall is still slightly lower than other months, at just over 3 inches. 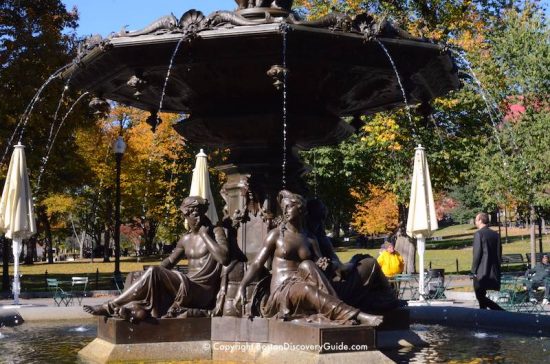 Read below for information about Boston weather in November (Photo credit – boston-discovery-guide.com)

There’s no hiding the fact that Boston in November gets pretty cold. Sometimes getting cold enough to see snow, daytime highs just about linger in the acceptable range at 52°F (11°C), while nights come close to freezing. Rain fall heads in the opposite direction. The 4 inches that falls in November makes it the second wettest month of the year. 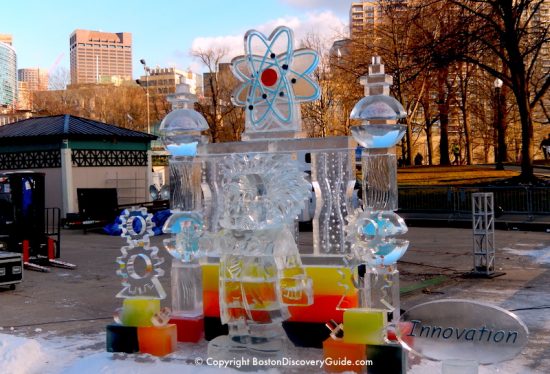 Read below for information about Boston weather in December (Photo credit – boston-discovery-guide.com)

If November avoids the snow, it will definitely begin to fall during December, which can see up to 9 inches fall, alongside a chill 3.5 inches of rain. Temperatures day and night are never far away from freezing, with highs of just 41°F (5°C) and lows that can hit 28°F (-2°C).

What is the best time to visit Boston weather wise?

Boston’s east coast location means the best time to visit the city weather wise is almost certainly the summer months of June to September. Not only do these months have the warmest average temperatures – peaking in July at 86°F (30°C) – but this month is also able to boast the longest day of the year. There’s the promise of at least 12 hours of daylight and sunshine, while rain fall levels are no worse than at any other time of year.

To avoid the worst of the heat or humidity for those who prefer it a little cooler, the best time to visit Boston weather wise are the city’s two shoulder periods, either at the beginning of spring in April/May, or into fall at the end of September and earlier in October.

Final thoughts on the best time to visit Boston

Boston’s weather is certainly variable, with the depths of winter seeing 10 inches of snow cover and temperatures lurking around freezing even during the day, while the summer months experience very decent temperatures and spectacular levels of sunlight too.